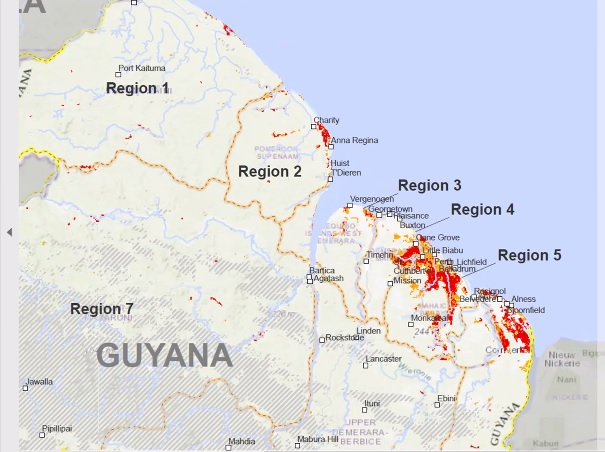 A number of the water-saturated areas in Guyana. Officials say other areas are flooded but the satellite did not capture those due to cloud cover.

A team of  Caribbean experts is expected in Guyana to conduct a detailed assessment of the one month long flood that has affected about 30,000 households, even as more intense rainfall continues to batter the country, officials said Wednesday.

CDC Director-General Lt. Col. Kester Craig said those sectors would include mining, health, water and sanitation, agriculture infrastructure and housing. That assessment would lead to an estimate the cost of recovery. “The intent is for all stakeholders to work very closely with the teams involved to ensure the data, local guidance and context are provided to the team to ensure that we have a very detailed assessment which will drive and inform decision-making,” he said.

He explained that such an activity would be “much broader” as it would examine all the sectors that have been affected for international aid-mobilisation for Guyana. “They will use data from the CDEMA process to inform more medium-term and long-term recovery efforts,” he said.

Chief Hydro-meteorologist, Dr Garvin Cummings said that, in keeping with previous forecasts that rains would continue until August, “the concern for flooding is very high, the risk of flooding is still very high” and so all measures would have to be taken.

Looking ahead for the next five days, he said a number of tropical waves is affected all of Guyana. From Wednesday  through Sunday, the country will experience between 2 and 4 inches of rainfall.

On Tuesday, he said between 11:30 am and 1 PM, Georgetown recorded more than 3 inches  rainfall, and on Wednesday between 4 AM and 8 AM more than 2 inches of rainfall was recorded preliminarily.