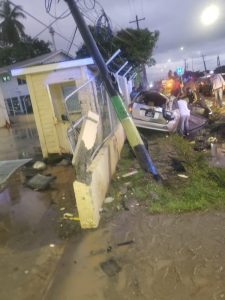 Three persons, including the driver of a hire car, were Monday morning killed in a road accident at Fort Wellington, West Coast Berbice, police said.

The toddler’s condition is listed as critical, her mom is in a stable condition and 57-year old Lakeram Mangal of 696 Angoy’s Avenue is critical but stable, police added.

Police say Edwards was proceeding west along the southern side of Fort Wellington Public Road at a fast rate when he lost control of the vehicle while negotiating a turn while it was raining.

The report says he collided into the Guyana Election Commission (GECOM) concrete fence before crashing into a utility pole, then turned turtle into a drain at the side of the road.

The deceased were pronounced dead at the Fort Wellington Hospital while the injured were taken to the New Amsterdam Hospital.

Initial reports are that the occupants were travelling in a car.