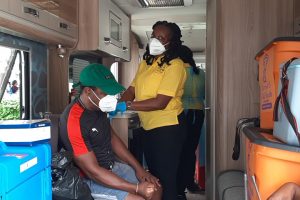 Health Minister Dr. Frank Anthony on Monday said if Guyana had followed other Caribbean countries in depending on the COVAX facility to acquire vaccines, only about 10 percent of the adult population would have been vaccinated against the COVID-19 virus.

Responding to opposition questions about approval for GYDS$1.3 billion already spent on purchasing 300,000  Sputnik V and Sinopharm vaccines, he told the National Assembly that more than 44.3 percent of Guyana’s population has already received the jab.

Opposition Leader Joseph Harmon asked the Health Minister to justify how Guyana has paid more for the vaccines- Sputnik V at US$24.00 per dose instead of US$10.00 and Sinopharm at US$16 instead of US$5. In response, Dr. Anthony said the higher prices are due to scarcity and transportation. “If it is not available, then we have to buy at the price that we are getting it at,” he said

The Health Minister told the House that Pfizer and Moderna have already informed that they could not supply Guyana vaccines until 2022. He said there was a global shortage of Pfizer and AstraZeneca vaccines  in February, 2021.

He restated that through a Caribbean Community (CARICOM) initiative with the African Union, Guyana would be acquiring 148,000 dose of the Johnson and Johnson jabs.

On whether all of the vaccines have been approved by the World Health Organisation, he said that only Sputnik V has not received Emergency Use Listening, but Guyana went ahead based on the efficacy of the vaccine and its technical merits. “All the clinical data is showing that it is an extremely good vaccine and that is why we are using it,” he said.

Previously, India had donated 80,000 AstraZeneca vaccines, in addition to negotiating prices for more of that brand through the COVAX initiative.