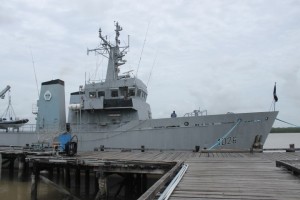 Guyana has decided to purchase a US$11.5 million brand new offshore patrol vessel from the United States company, Metal Shark.

This disclosure was made on Monday Minister of Governance, Gail Teixeira when she was asked several questions by Opposition Leader Joseph Harmon about GYDS$618 million that have been already paid to the manufacturer.

She says the vessel will be used by the Coast Guard as part of Guyana’s efforts to patrol its Exclusive Economic Zone, in light of the territorial threat by Venezuela, piracy, and illegal fishing. “We have a border issue. We have our waters where there were incursions. We have one old vessel and, therefore, a decision was taken that one could acquire a new one,” she told the National Assembly’s Committee of Supply.

Ms. Teixeira declined to give further details about the vessel due to security reasons.

The full cost of the vessel is US$11.5 million or about GYD$2.5 billion.  The Governance Minister says the vessel will not arrive in Guyana until the second to last payment is made in 2022.

She says that the vessel will be purpose-built, but the present agreement does not include training in the use of the vessel.