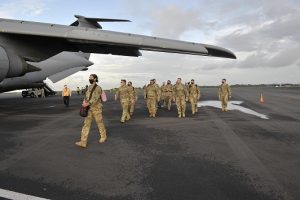 A C-5 Galaxy aircraft landed at Cheddi Jagan International Airport in Timehri, Guyana on 8 June 2021 transporting Blackhawk helicopters, mission equipment and members of the 185th Aviation Battalion from the Florida National Guard for the upcoming Exercise Tradewinds 2021 (US SOUTHCOM picture)

She said the annual exercise, which is being hosted by Guyana and would last until June 25, would focus on improving security in a wide range of areas.

“It’s really related to all sorts of security issues. You know, this is our neighbourhood and we want to make sure its secure, not only for oil and gas but for the citizens of these nations and for all kinds of trade that is happening in the regions so it’s really giving all of these nations an opportunity to improve their partnerships, improve their capacity, to work together to address the key threats in the region which include transnational criminal activities, the transportation of illegal goods and things of that nature,” she told News-Talk Radio Guyana/ Demerara Waves Online News.

The American envoy dispelled suggestions that Guyana has been selected to host Exercise Tradewinds because of the country’s mushrooming oil and gas sector, saying that this South American Caribbean Community (CARICOM)-member state offered to be the host nation after Barbados decided against doing so.

Chief-of-Staff of the Guyana Defence Force (GDF) Brigadier Godfrey Bess told the opening session that Exercise Tradewinds focusses on a range of threats. He noted that in a number of countries, the militaries have been assisting civilian law enforcements to address problems such as gang violence, drug trafficking and maintaining law and order. 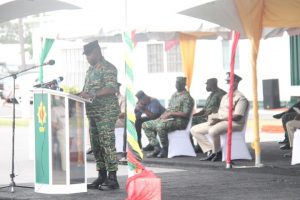 “Sustained peace and stability across the Caribbean region and within the borders of our partner nations are of critical importance to all, particularly in the face of a global environment that is witnessing unprecedented change on the political, economic, ethnological, environmental and human sustainability spectrums,” he added. 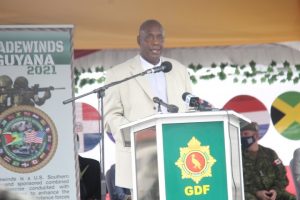 Speaking at the event at the Guyana Defence Force (GDF) headquarters, Director of Exercises in Coalition Affairs at the United States Southern Command (SOUTHCOM),  Retired Lt. Col Mr. Kevin Bostick says the exercise has started. “I was able to go out to three or four different sites yesterday (Saturday); some of the training has already started. It was great to get on the ground and be able to see what the young troops are doing, what the older troops are teaching them and what the combined effort is going to bring forward over the next couple of weeks,” he said.

The annual exercise is managed by SOUTHCOM, in collaboration with defence forces and armies in the Americas, Caribbean and Europe.