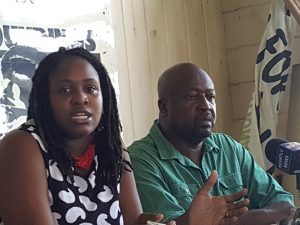 The Working People’s Alliance (WPA) on Saturday assailed the Leader of the People’s National Congress Reform (PNCR), David Granger for saying that that party exited the coalition because no agreement had been reached on the selection of the parliamentarian.

“We are disappointed by the recent suggestion by former president and PNC leader, David Granger, that WPA left the Coalition over spoils of office. We wish to reject this charge as a figment of Mr. Granger’s imagination,” the WPA stated.

Rather than attempting to portray the WPA as power-grabbers, that party urged Mr. Granger “to reflect on how his un-fraternal attitude to partners helped to facilitate the ousting of the Coalition from office.”

The WPA had submitted the names of four possible parliamentarians to Mr. Granger, who is the Representative of the coalition of A Partnership for National Unity+Alliance For Change’s (APNU+AFC) List of candidates, and he picked Tabitha Sarabo-Halley. However, the WPA had criticised that move on the grounds that it had not been consulted on who should have been picked in what the WPA had been intended to be  a rotational arrangement.

Ms. Sarabo-Halley, a former Minister of the Public Service,  eventually resigned from the post of WPA Chairman, remains a parliamentarian and has since been identified as the representative of the unknown Guyana Nation Builders Movement (GNBM) party in the coalition.

The WPA said it decided to leave APNU because of Mr. Granger’s apparent unilateral selection of that party’s representative to sit in the 65-seat National Assembly.  The WPA also partly blamed the PNCR Leader for the coalition’s defeat at the March 2020 general and regional elections. “We also remind Mr. Granger that his decision to unilaterally name WPA’s representative to a seat that was allocated to the party as part of the APNU delegation in the National Assembly was the occasion to take our exit from a partnership that he mismanaged throughout the Coalition’s tenure in office,” the party said in a statement to mark the 41st anniversary of the assassination of WPA co-leader Dr. Walter Rodney. The WPA had often publicly complained that APNU had scarcely called meetings to influence government policy.

For his part, Mr. Granger has already given himself good marks for managing the APNU coalition from its formation in 2011 through to 2020 when the APNU+AFC lost power. “I am not an immodest person but I must say my leadership, the experience which I brought to the partnership under the coalition, I think people accepted that I was a good manager of these six different parties and that I had the experience and that I, too, had the vision, I shared the vision,” he said in April, 2021.

Responding to critics who had lampooned the WPA for coalescing with the PNC that had been cited as having been responsible for Rodney’s bomb-blast death on June 13, 1980 on John Street, near the Georgetown Prison, the WPA said its late leader had pushed for national reconciliation in the form of a national government that would have included the PNC. “What is not so well known is his acceptance that a PNC that embraces free and fair elections as normative and eschews dictatorship must be part of Guyana’s political solution,”  WPA defended its association with the PNCR, arguing that Rodney’s national consensus and reconciliation agenda could not exclude the party that electorally represents one of Guyana’s major ethnic groups and  approximately half of the electorate.

The WPA sounded an unforgiving tone for the President Granger’s decision abruptly end the Walter Rodney Commission of Inquiry (COI) without consulting that party and refusing to release the report of the COI and implement recommendations.

Although Mr. Granger’s stance “rubbed salt in the wounds”, the WPA defended its decision to remained in the government. Out of respect for those who voted for the Coalition –we felt the voters who casted votes for a coalition deserved the government for which they voted. The WPA was not comfortable with the notion of being the spoiler as
others eventually opted for, the WPA said.

The WPA also took a verbal swipe at the incumbent People’s Progressive Party (PPP) suggesting that that it was responsible for galloping authoritarianism, external entanglement in Guyana’s domestic politics—a development that flies in the face of Rodney’s vision of a non-racial Guyana, 43 percent poverty, and mismanagement of the COVID-19 pandemic to the benefit of the business class. “To laud Rodney while presiding over or enabling these atrocities is the height of contradiction and hypocrisy,” the WPA said.

The WPA earlier this week welcomed a raft of steps that the PPP-led administration has announced that it would take to honour Dr. Rodney at  the request of his wife and children. These include invalidating the 1988 inquest that had found that he had died as a result of misadventure, stating “assassination” as the certified cause of death, use of his children story books in the school’s curriculum, renaming of the National Archives; retrieval, digitizing and storing of all records from the 2014 COI at the Walter Rodney Archives and at a university in the United States.