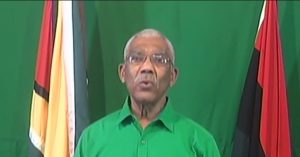 Former President David Granger has scolded trade unions in Guyana for failing to represent workers who have been sent home since by the People’s Progressive Party Civic (PPPC) civic administration since returning to office last year August.

Estimating that about 1,700 workers have been laid off,  he said all that has been done so far by unions have been public statements instead of pressuring government to account for its actions. “The labour union is not a united body and there has been no apparent coherent response to the dismissal of public sector workers,” said Mr. Granger who is the Leader of the People’s National Congress Reform (PNCR).

The Guyana Public Service Union and the umbrella Guyana Trades Union Congress have repeatedly criticised the Irfaan Ali-led administration for the layoffs, but Mr. Granger criticised the labour movement for appearing to be helpless towards the workers. “I don’t think they can turn to the unions for any assistance. The unions have all spoken out but there is no pressure on the government to even establish a tribunal to examine each dismissal on a  case-by-case basis and to determine whether the dismissals or the removals were justified and seek redress and this is a task for the unions to represent their workers, not simply to publish a press release or to have a press conference,” he said.

The Amalgamated Transport and General Workers Union (ATGWU) has been silent concerning the continuing retrenchment of 173 workers from the Guyana Water Inc. (GWI); that utility company having already said that union had not objected to the layoffs.  Granger’s PNCR-led A Partnership for National Unity+Alliance For Change (APNU+AFC) agitation in the media has since waned.

Under his administration, at least 7,000 sugar industry workers had been retrenched with the closure of four sugar estates. The High Court later ordered the state-owned Guyana Sugar Corporation to pay severance and interest to axed Wales Estate workers.

Mr. Granger said trade unionism would continue to be very important in addressing workers’ welfare, but they need to move away from that “narrow path” of wages and strikes but focus on larger issues such as occupational safety and health, layoffs, safety nets to cushion workers from the impact of adversities such as COVID-19, education and training, and entertainment.

Noting that “the situation is very grim” due to weeks of countrywide floods and the now more than one-year long COVID-19 pandemic, the PNCR Leader called on the unions to meet workers and “explain to them what they can do to relieve their plight.”

The trade union movement has been split along political lines, with the GTUC and many of its affiliates being perceived in some quarters as anti-PPP and those under the banner of the Federation of Independent Trade Unions of Guyana (FITUG) being regarded as anti-PNCR/APNU+AFC.

The Irfaan Ali-led administration has defended its decision to lay off a number of workers on the grounds that they were politically active.