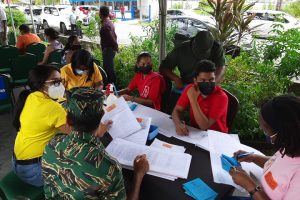 Health Minister Dr. Frank Anthony on Monday announced that Guyana has purchased 150,000 of the single-dose Johnson & Johnson vaccine to be administered to persons mainly in the interior regions, as part of the overall plan to build up resistance to the coronavirus by most Guyanese.

“I think once we are able to get that, it will be very appropriate for us to use that especially in the interior areas because some of those areas are very difficult to reach and if you give the one-shot then that will be very helpful for the staff out there,” Dr. Anthony said in his latest COVID-19 update..

He said government last week paid for the Johnson & Johnson vaccine and the  doses are expected to arrive in June. Those jabs are being made available through a partnership between the Caribbean Community (CARICOM) and the African Union. Of the 1.5 million doses that would be provided to the Caribbean, the Health Minister said

Another set of vaccines are expected by mid-June through the COVAX facility.

The Health Minister said Guyana was working on the logistics and number of the Russia-made Sputnik V vaccines, with the expectation that they would arrive later this week.

Dr. Anthony highlighted that there is no evidence of fully vaccinated persons being infected, falling severely ill or dying from COVID-19.

Of the 2,041 active cases, 104 persons have been hospitalised and they include 23 receiving intensive care. Forty-two new cases were recorded on Monday.

The Health Ministry said that up to Monday, 389 persons have succumbed to the viral disease.