Opposition Leader Joseph Harmon on Monday called on President Irfaan Ali to resign for allegedly interfering in the work of the Police Service Commission (PSC), but the governing People’s Progressive Party (PPP) accused him of double-standards.

“The attempt to influence the work of the Police Service Commission is reprehensible and renders the President unfit to hold office and he should resign at once. This is a grave breach of the Constitution,” Mr. Harmon said.

The PPP scolded Mr. Harmon for seeking to score political capital, while at the same time ignoring the fact that the High Court had found that then government minister Simona Broomes had breached the constitution for instructing the Public Service Commission not to promote public servants at the request of the then President David Granger. Further, the PPP highlighted that the High Court had found that Mr. Harmon, as Minister of State, had violated Guyana’s constitution by instructing the Police Service Commission not to go ahead with promotions.. “So Harmon and the APNU/AFC should be the last to speak about these matters. His outpourings  therefore, constitute hypocrisy, duplicity and the shedding of crocodile tears,” the PPP said. 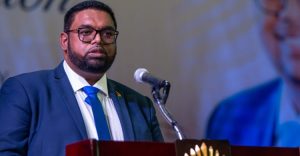 The PPP questioned the motive of the PSC Chairman to only now accuse the President of political interference when he has been charged jointly with others to defraud the Guyana Police Force of GYD$10 million and is being investigated for a sexual  offence. Mr. Slowe has denied both accusations.

“This gentleman who now presents himself as a paragon of virtue saw nothing wrong in receiving millions of dollars from the Guyana Police Force while he is the Chairman of a constitutional commission,
wielding disciplinary powers over the very Force,” the PPP said, adding that “Clearly, in the face of these very serious allegations, Mr. Slowe has become a desperate man.”  Mr. Slowe has already denied that a review of the police force standing orders had been already completed by a consultant, and said his exercise had ground to a virtual halt due to the elections situation last year and later the COVID-19 pandemic.

Opposition Leader Harmon said Ali’s actions threatened both the independence and existence of constitutional bodies and are consistent with the anti-democratic nature of the “installed” PPP regime.”

The High Court will shortly rule on  a case brought by Messrs. Brutus and Baksh on whether the PSC could refuse to promote officers if they have notices of pending disciplinary action in their files. The Chief Justice Roxane George-Wiltshire has said that her decision would have a bearing on all service commissions.

The PSC’s three-year life automatically comes to an end in August, 2021.