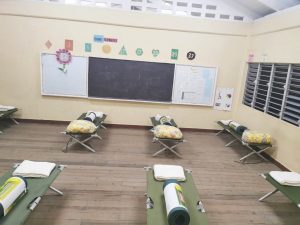 The Civil Defence Commission (CDC) is preparing to relocate at least 14 persons from the Graham’s Primary School, East Coast Demerara so that the building could be sanitised in time for students to write mock Grade Six examinations in early June,  CDC Director-General Lt. Col. Kester Craig said Monday.

He said another building is being prepared to house those persons who are being temporarily housed at at Graham’s Hall Primary School since October, 2020. “We are looking at an alternative facility and very soon, as a matter of fact, maybe by next week, they should be relocated and the school will be available,” he told News-Talk Radio Guyana 103.1 FM/ Demerara Waves Online News.

The mock exam is scheduled for June 9 to 10 and the National Grade Six Assessment would  be held in August 4 to 5, 2021.

The concern had been reportedly raised with Education Minister Priya Manickchand in a meeting with parents and teachers on May 11, 2021. The minister did not respond when News-Talk Radio 103.1 FM  reached out to her for a comment.

Sources said that before the decision had been taken by the CDC to relocate the students, suggestions had been floated for the mock exams to be administered virtually or at students’ homes. However, those suggestions were thrown out because, according to sources, those settings would not allow for a proper assessment of the students in examination conditions.

Graham’s Hall Primary School, regarded as one of Guyana’s leading primary schools, has a student population of 1,006 including 154 Grade six students as well as 53 teachers.