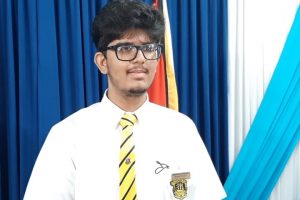 The Caribbean Advanced Proficiency Examinations (CAPE) top Caribbean performer, Guyanese Zane Ramotar, plans to become a Physicist and return to Guyana to teach the subject at the tertiary level.

“I am not entirely sure what job I want to have but I really would like it to be in the field of physics. That’s where my passion is; probably, maybe a lecturer or maybe just a general physicist,” he said

He revealed his plans shortly after Minister of Education, Priya Manickchand announced the top performers for CAPE and the Caribbean Secondary Education Certificate (CSEC) at the National Centre for Educational Resource Development (NCERD). 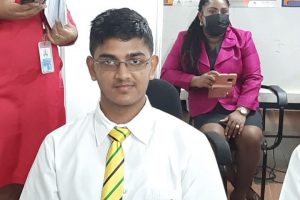 Mr. Ramotar said he has already secured a placement at the United States-based University of Southern California after which he plans to return to “develop Guyana especially in the field of physics.”

He is confident that there is scope for physicists in Guyana because the subject area is regarded as a tough subject. “That’s not the case so I want to change the perspective on that,” he said.

Topping the region at CSEC was Guyanese Bhedesh Persaud, who has his eyes set on becoming either a mechanical or aeronautical engineer. “I am fascinated about physics and math and science in general and I am fascinated about making things to solve problems,” he said.  Crediting his performance to “a lot of discipline”, he said COVID did not affect him in the transition to Online Learning.  Mr. Persaud plans to enroll in a foreign university after CAPE 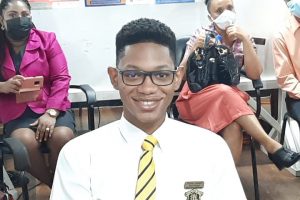 Samuel Haynes, who was recognised for his notable and commendable performance, plans to possibly become a dermatologist. During his CAPE studies, he was able to find the right mix between studying on the one hand, and recreation and extra-curricular activities. “I played the piano for my church. I would watch different TV shows and series if I am eating so I never have this period of strictly studying all the time. I have a good balance,” he said.

While the students enjoy the right to choose tertiary institutions to advance their studies, the Minister of Education Priya Manickchand said scholarships are available from the Guyana Online Academy of Learning (GOAL), in addition to Presidential Awards for the top two CSEC achievers that are available through the Ministry of the Public Service for selected high performers. “I encourage you all to look at those programmes…There is no age limit upwards but what I have seen, the response has been a lot of younger people looking to utilise these opportunities and so I encourage you too,” she said.

2021-05-19
Denis Chabrol
Previous: OPINION: With political groups and leaders like these, we are dead
Next: Police Service Commissioners, retired police officers arrested for several alleged offences