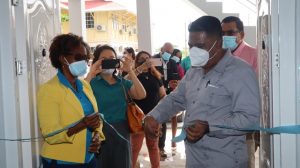 The FAO Country Representative Ms. Gillian Smith and Minister of Agriculture Zulficar Mustapha at the ribbon-cutting to mark the official opening of the FAO’s Office at LBI.

The Food and Agriculture Organisation (FAO) wants the Caribbean to become more analytical in its drive to improve agriculture and food security in the region, even as Guyana promised to play a leading role in regional self-sufficiency.

The FAO’s sub-regional Coordinator, Dr. Renata Clarke issued the call at the formal opening of that United Nations agency’s office at La Bonne Intention (LBI), East Coast Demerara. Against the backdrop of the harsh impact of the coronavirus on the region for more than one year now, she said a “collective plan” needs to be backed by a detailed examination. “This will require solid analysis and I look forward to the support that FAO can provide in working with the CARICOM member States, including Guyana, in providing a solid analytical support for policy making,” she said in remarks delivered virtually on Friday.

Minister of Agriculture Zulficar Mustapha said Guyana has over the past eight months regained its place in pushing regional agriculture at a time when the Caribbean’s food import bill is now between US$5 billion to US$8 billion annually. He said Guyana would be looking to the FAO for support in developing its aquaculture industry. “There is great potential for aquaculture in North America and the Caribbean and we need to tap into these markets,” he said.

Mr. Mustapha said Guyana was hoping to reduce the amount of imported soya and corn which are being imported at a cost of US$25 million annually. “We are about to take that market too,” he said.

Guyana has already begun a national conversation on the state of agriculture ahead of the UN Food System Summit scheduled for September.