CCJ’s role in Guyana’s elections should be reduced- Granger 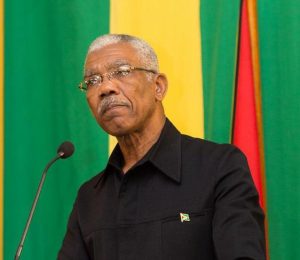 Leader of the People’s National Congress Reform (PNCR), David Granger has said the laws should be amended to reduce the role of the  Caribbean Court of Justice (CCJ) in Guyana’s elections.

The PNCR Leader has not held a news conference in months to deal with political issues facing the country and his party.

Mr. Granger’s PNCR-led A Partnership for National Unity+Alliance For Change (APNU+AFC) has lost almost all of the election-related cases in the High Court and the CCJ dating back to the December 2018 no-confidence motion to the question of the role of the Chief Elections Officer in determining valid votes.

He highlighted the ruling of the “very strong” Court of Appeal that had essentially stated that the Chief Elections Officer should determine what are valid votes. “You cannot accept the CEO to rule or to accept invalid votes,” he said.

The PNCR Leader also cited the need for electoral reforms in other areas such as making it clear that the Chief Elections Officer’s role should be to advise the seven-member Guyana Elections Commission (GECOM) on what constitutes valid votes. “He has to advise the Chairman. He is the source of, he is in charge of the machinery, the bureaucracy, not the Chairman. The Chairman doesn’t go out in the field and see what’s happening at all of the polling stations,” he said.

Mr. Granger proposed that an electoral reform process should include removing the possibility of a protracted process for the appointment of a GECOM Chairman. Then-Opposition Leader Bharrat Jagdeo had submitted three lists of six nominees each but they had all been rejected by then President Granger on the grounds that they had not been fit and proper. Eventually, the CCJ ruled against the process that Mr. Granger had used.

The PNCR Leader did not refer to the United States-funded International Republican Institute (IRI) electoral reform project, but his coalition and its three GECOM Commissioners,  the Guyana Human Rights Association and the African Cultural and Development Association have all poured cold water on the planned 18-month initiative.

He reiterated the need to sanitise the voters list to remove the names of deceased persons. The APNU+AFC coalition continues to maintain that the People’s Progressive Party (PPP) had rigged the elections largely through voter impersonation.

After a recount of the votes that had been cast on March 2, 2020, the figures had shown that that they had almost matched those on the Statements of Poll that representatives of all contesting political parties had signed on polling day.

APNU+AFC says the next step is for the Guyana Court of Appeal to hear appeals of the High Court’s decision to dismiss two election petitions.