Referring to a report by the Chief Executive Officer of the Central Housing and Planning Authority (CH&PA), Sherwin Greaves, the Minister said the builders have begun demobilising their equipment from the site. “There is visible evidence of removal of machinery, the trucks and so forth you see on site there,” he told News-Talk Radio Guyana 103.1 FM/ Demerara Waves Online News.

Mr. Croal regards the removal of the equipment as “evidence of compliance of cease of all operations so that is what I have seen today.” He said the authorities “would contemplate the next steps” concerning the actual concrete manufacturing plant.

There is a pending case against the company, Superior Concrete Inc; and the CH&PA is named as a respondent in that suit.

Mr. Croal, who has ministerial responsibility for the CH&PA, said no application was ever received by that regulatory agency which is responsible for processing such land-use applications. “There was a review of the company so when we checked the review of that company and, of course, prior to yesterday, we were able to establish, there was absolutely no application sent into CH&PA for construction approval so it was clear what they were doing was in breach,” he said. 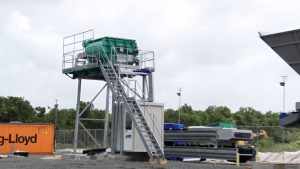 The Mayor and City Council, as the relevant local authority for the City of Georgetown, was merely expected to say whether it has objected to the project.

The removal of the equipment from the site commenced on Wednesday, a day after the Housing Minister and the CH&PA’s CEO visited the area and were allegedly greeted with hostility by top representatives of the company.

Mr. Croal said after residents had complained about the construction of the concrete plant, the first contravention order was issued , a second one was issued last  Saturday and final one on Tuesday.  He said in the first instance, the enforcers were greeted with hostility and the order was tossed away.

The Housing Minister noted that the one of the Supreme Concrete  workers was working here illegally because the work-permit was issued to him while he was working with NABI and Sons at the construction of ExxonMobil headquarters at Ogle, East Coast Demerara. He said that another worker has been given 24 hours to leave Guyana because the one month stay granted by immigration expired on Tuesday.

Meanwhile, Andrew Mekdeci on Tuesday night denied any involvement with the company, Superior Inc; except that his company was maintaining the access road. Stressing that his company does not violate any laws, Mr. Mekdeci said his company’s machinery would be removed from the area. “I have since been informed the Government of Guyana has issued a cease order and  we are going to fully comply, with the law, as we have always done. Immediately, we have started to demobilize our equipment from the site and will fully cooperate and comply with the instructions from government departments and regulatory agencies,” he said.