President Ali expresses “regret”, amid concerns about a section of Arrival Day message 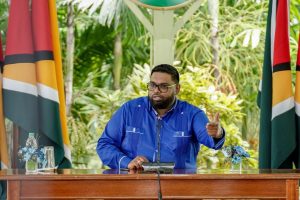 In the fact of criticisms from several quarters about a section of his remarks in his Arrival Day Message that critics say gave the impression that Africans came to Guyana in the quest for a good life, President Irfaan Ali last night expressed regret

“To my fellow Guyanese, who felt offended by the way in which the language was structured, you have my unreserved regret and assurance that the struggles of our enslaves African ancestors would never be understated and unappreciated. They gave their lives for our freedom and, as a nation, we must be forever grateful,” he said in a statement issued Thursday night.

Earlier Thursday, Opposition Leader Harmon wrote President Ali calling on him to make an “earliest correction of these utterances.”

Mr. Harmon cautioned that political leaders must strive to be factual in their assessment of these most profound historical matters as they have direct implications for the cohesion of a multi-ethnic, multi-cultural society.

President Ali had originally stated in his Arrival Day Message that “Let us remember that every group that came did so for improvement, did so to have improved living conditions, did so so that successive generations will be better off.”

Mr. Harmon, in his letter to the President, registered his strong objection. “Your statement suggests that Africans who were brought here against their will, bound in chains and transported across the Atlantic in subhuman conditions did so for  improvement. Nowhere is this recorded as a historical fact.”

The President, however, bluntly rejected assertions that he intended to understate the historical conditions that Africans have had to endure. He explained that his Arrival Day Message sought to convey common values, common struggles and eventually reconciliation among Guyanese.  “I was not and could not ever have been referring to our African ancestors, who did not come here of their own volition, but were captured, brought to our country in chains and brutally enslaved,” he said.

Dr. Ali again pledged to unify Guyanese. “I affirm and repeat the thrust of my personal and public mission in reconciling this country after a very divisive period in our history,” he said.