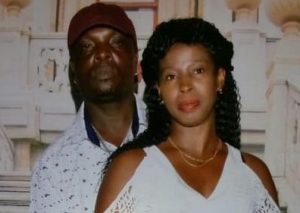 A man stabbed his reputed wife to death Saturday night after she told him that he could not accompany her to her sister’s birthday party because his presence would not have been appreciated, the Guyana Police Force said.

Police gave that account of the motive for the killing of 43-year old Nicola “Lisa” Wilson of 57 Joseph Pollydore/ D’urban Street, Lodge, Georgetown by 50-year old Lawrence Brummel at their home.

“On 2021-05-01 upon their return from a church meeting, her 14-year-old son alleges that his mother informed the suspect that he cannot accompany them to her sister’s birthday party since he is not welcomed there,” investigators were informed.

Brummel was up to Sunday hospitalised in an unconscious condition as a result of the poison he drank shortly after stabbing Wilson about 14 times.

Wilson was the owner of ‘Blue Flame Snackette’ at Vreed-en-Hoop, West Bank Demerara, and Brummel is a well-known plumber.

The Guyana Police Force said the man subsequently drank poison and went to a nephew in Festival City, Georgetown where he confessed to the crime and gave him several of his belongings to be divided among family members when he died.

Although Brummel refused to go to hospital, he was eventually subdued and rushed to the health care institution where he is a patient under police guard.

Wilson’s son said after his mother refused to allow Brummel to accompany her,  he went outside and five minutes later he heard his mother screaming. The lad said he returned to the house and saw the suspect armed with a knife, stabbing his mother who later fell to the ground on the back landing.

Her son said also told police that he raised an alarm and confronted the suspect who attempted to stab him but failed since he averted the attempt.