ExxonMobil increasing production, but equipment not yet fixed 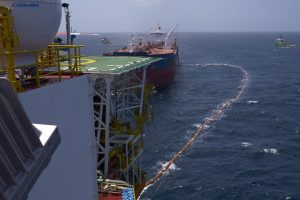 The fuel hose leading from the FPSO, Liza Destiny, to the Cap Philippe for the transfer of Guyana’s first million barrels of crude. (FILE PICTURE)

ExxonMobil Guyana on Wednesday said production was being gradually increased to a maximum of 110,000 barrels per day, although the discharge silencer has not yet been fixed, the company said.

The company, whose local partners in Esso Exploration and Production Guyana Limited (EEPGL) are Hess Corporation and China National Overseas Oil Company (CNOOC), said production was being gradually increased from the 30,000 barrels per day that it had been reduced to on April 11.

“We have begun to slowly ramp up production to between 100,000-110,000 barrels per day at a flare level of no more than 15 million standard cubic feet per day (mscfd) of natural gas. The decision to again hike production nearer the 120,000 barrels per day capacity came against the background of the company also saying on Wednesday that repairs to the discharge silencer could take several months. “We estimate that repairs or replacement will take approximately three months,” the company said.

Asked why production was being increased although the discharge silencer aboard the Floating Production, Storage and Offloading (FPSO) vessel, Liza Destiny, has not been repaired, ExxonMobil Guyana spokeswoman, Janelle Persaud said, “it’s a case of balancing economic and environmental considerations which we aligned with the government on.”

The company indicated that the Guyana government appeared to agree to increase production while assessments, repairs or replacement is done. “These operating parameters were defined after careful consideration of safety, environmental, technical and economic factors as well as discussions with the relevant government agencies on the best path forward while repairs and upgrades are ongoing,” ExxonMobil said.

ExxonMobil said the discharge silencer has been removed for further assessment of the damage and to determine the extent of repairs and/ modifications.

The American supermajor, which is the operator in the prolific Stabroek Block, said plans initiated in 2020 are progressing to install a redesigned third stage flash gas compression system at the end of this year.

ExxonMobil Guyana restated that it was extremely disappointed by these ongoing technical challenges but “we are proud of the team offshore that continues to work safely and manage operations efficiently during the COVID-19 pandemic.”

The company assured that “we will continue to work with the relevant parties to rectify the situation as soon as possible.”

The Liza Destiny has been plagued by problems dating back to December 2019 when Guyana for the first time in its history began commercial oil production. This is the third time that production has been affected by a poor performing flash gas compressor and since its replacement the silencer.