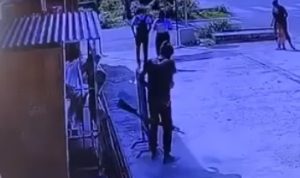 The shotgun falling off the security guard’s shoulder.

A guard attached to North West Security Service has been arrested in connection with the accidental discharge of a shotgun cartridge while he was on duty.

Police say the 12-gauge shotgun, cartridge casing  and live ammunition have been seized and the guard, whose name is Dequan James,  has been arrested.

At the time of the accidental discharge of the firearm yesterday morning, he was on duty at Moon Supermarket at LBI East Coast Demerara.

Investigators were informed that after the incident, the security guard contacted the Chief Security Officer of North west security, Mr. Kendall and informed him what had happened.

Police have warned the Chief Security Officer to provide all relevant documents about the said firearm.