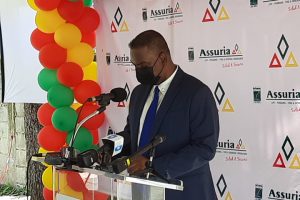 Speaking at the symbolic turning of the sod on the plot of land at Church and Carmichael Streets, Georgetown, he said the five-storey modern building would be finished in 14 months.

“We are here to stay and contribute to the development of Guyana,” Yogindra Arjune said in brief remarks. NABI Construction has been contracted to build the new edifice.

Assuria began operations in April 2012 and since then, Mr. Arjune said the ISO-certified insurance company now has eight branches, 67 employees and 18 full-time agents. 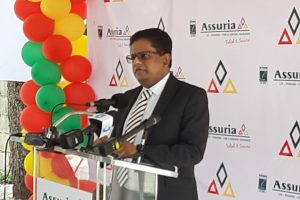 Assuria is also operating in the twin-island nation of Trinidad and Tobago.

The Finance issued a stirring appeal to world-class Guyanese companies to expand their operations into other Caribbean and extra-regional countries. “I would like to take this opportunity to say to the domestic private sector to  look at the Assuria example as an example that you can emulate,” he said.

He noted that many Guyanese companies have not improved their standards as a result of the emerging oil and gas sector, adding that there are prospects for them to expand their international footprint.

The Finance Minister charged the Insurance Supervisory arm of the Bank of Guyana, the Insurance Association of Guyana and individual insurance companies to educate Guyanese about the importance of insurance as a form of risk management.

He also called on the companies to devise new insurance products to mitigate a variety of personal, domestic and business risks, as part of an organised, well-regulated and expanded sector.

2021-04-07
Denis Chabrol
Previous: As COVID cases, deaths continue to spiral, no word on new variants in Guyana
Next: Waitress, man arrested in connection with robbery at Mon Repos bar