As COVID cases, deaths continue to spiral, no word on new variants in Guyana 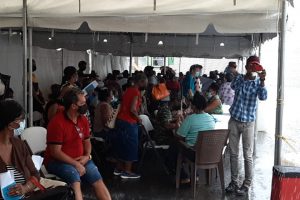 A section of the public who turned out be vaccinated at the Ministry of Health, Brickdam.

As the coronavirus death toll continues to rise steeply in recent weeks, Health Minister Dr. Frank Anthony said on Wednesday that Guyana does not know what variants of the virus are here.

“As it pertains to what variant or variants we have in Guyana, we don’t know because while we would have sent samples to CARPHA for genetic sequencing, results from those samples did not come back specifying that we have any of the newer variants so we don’t know what variants we have in Guyana and we can only know that if it is confirmed by genetic sequencing,” he said.

Dr. Anthony said samples were being routinely collected through tests for the virus , and the Health Ministry hoped that arrangements could be out in place for them to be sent to  CARPHA. In the absence of genetic sequencing, the Health Minister said evidence from the hospitals is showing that more and younger persons are falling ill.

“What we can say based on what we are seeing clinically is we are seeing more hospitalisation, we are seeing when people come into the hospital, a percentage of those are getting sicker so we’re having a lot of cases in the ICU. Therefore, we know people are being affected by this in an adverse way,” he said.

The Health Minister said currently, 70 persons are hospitalised and of the 54 patients at the Ocean View Infectious Disease Hospital, 12 are in the Intensive Care Unit (ICU) there. He said patients were also admitted at the Linden, West Demerara Regional and the New Amsterdam Hospital.

There is no idea when CARPHA will again take more samples from Guyana to conduct genetic sequencing.

The Health Minister noted that different countries have had varying experiences with the vaccines which would prevent persons from being severely afflicted or die from the viral disease that has so far claimed 250 lives.