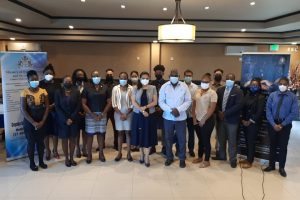 Minister of Human Services, Dr Vindhya Persaud and Minister of Home Affairs Robeson Benn with participants of the National Action Plan for Trafficking In Persons workshop.

Guyana would be putting in place legislation to counter human smuggling, amid continuing concerns  that large numbers of foreigners are being brought here and leave illegally to Brazil and French Guiana.

Home Affairs Minister Robeson Benn, however, could not say how soon the new law would be proposed to the National Assembly. “I wouldn’t put a time to it. We’ll work through the documentation, the development of the legislation and then we’ll have our discussion in Cabinet and then move on,” he told News-Talk Radio Guyana 103.1 FM/ Demerara Waves Online News.

Asked if human smuggling was as serious as Trafficking In Persons (TIP), he said “the two are closely intertwined so I would say ‘yes’.

In his address to the opening of a two-day workshop on the National Action Plan for Trafficking In Persons, he said TIP and human smuggling were together posing challenges for authorities. “The difficulty we have is the conflating of migration for social, economic reasons and the question of trafficking in persons and we think there is a seamless movement between the two issues- whether people are being trafficked or whether people are being smuggled,” he said.

Mr. Benn remarked that a three days ago a bus with several foreigners was detained a short distance from Lethem, a town near the border with Brazil. Sources have told Demerara Waves Online News that bus operators charge a at least US$1,000 per person to transit from Georgetown to Brazil illegally.  Part of the fare, sources said, are used to bribe policemen at check-points along the Linden-Lethem trail to all the buses to pass hassle-free. The Home Affairs Minister noted that corruption appeared to be key factor in the movement of the large number of mainly young women.

He urged the relevant personnel to examine the issues and regulations to deal with human smuggling. “Our view at this point in time is that we have to deal with not only the Trafficking In Persons issue, how it relates to people smuggling and how we have to move to work against the corrupting effects that it has in the police, with immigration, with officials, with people who create false identities and all of those things which still occurs,” said Mr. Benn who is the Chairman of the TIP Task Force.

Last month, through collaboration between the Customs Anti-Narcotics Unit (CANU) and the Brazilian Federal Police, 27 Haitians and one Cuban who left Guyana illegally were arrested in Bon Fim, Roraima State.

The Home Affairs Minister said the records show a huge gap in the number of Haitians, Venezuelans and Cubans who arrive here legally but are no longer in the country. “We note in our immigration records that there is a large deficit of those persons in the record,” he said.

He called for a multi-pronged approach to combat TIP by conducting raids and counselling as well as reduce the number of at-risk persons and locations while increasing TIP prosecutions.

Human Services Minister Dr Vindhya Persaud said human trafficking would be tackled through sensitisation and awareness about the differences from human smuggling as well as collaboration with the Home Affairs Ministry in enforcement.

The United States (US) has ranked Guyana at Tier 1 as a country that “meets the minimum standards for the elimination of trafficking in persons.”