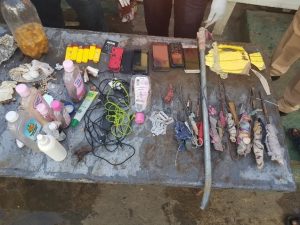 Several of the improvised weapons and other prohibited items that were found in the Lusignan Prison on March 16, 2021.

A prisoner, who was accused by two fellow inmates of “snitching” that led to a recent raid of the Lusignan Prison by police and prison guards, was  chopped several times Friday night, the Guyana Police Force said.

Injured is Ceylon “Tallman” David who is on remand for murder. Investigations so far reveal that murder accused Lennox Roberts and convict, Kentie Bacchus allegedly committed the offence amid their claims that he leaked information to security authorities. “The two suspects and victim are known to each other and the victim was accused by the suspects of ‘snitching’ which led to a prison search and several contraband items being removed,” police said.

Police said they were summoned by the Guyana Prison Service at about 7:30 PM Friday.

Investigators were informed that Roberts and Bacchus allegedly armed themselves with improvised weapons and chopped David several times on his face, hand and a foot.

Police said they have retrieved an improvised cutlass.