Shipper wanted for 11.5 ton cocaine bust was not member of scrap metal association 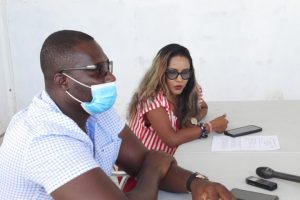 The Guyana Metal Recyclers Association (GMRA) has suggested that the Guyanese shipper, who is wanted for the 11.5 ton cocaine  haul in Belgium late last year, may have skipped scrutiny after the rules had been slackened  by the David Granger-led administration.

Association Secretary, Stephen Bourne said shipper Marlon Primo, who remains at large since the bust in Belgium last year November, was not a among the 23 registered shippers.  “That person was never a member of our association,” he told a news briefing on Wednesday. Mr. Bourne said the GMRA, which is registered as a not-for-profit organisation, was revived in September 2020 with a new executive.

GMRA Treasurer, Shalini Dias said A Partnership for National Unity+Alliance For Change (APNU+AFC)-led administration had not allowed his body to function for about five years. She recalled that when the trade was reopened in 2017,  “the association was basically disbanded by that administration.” “We weren’t allowed to basically monitor the trade or monitor the exporters so a lot of persons, including the exporter that was (allegedly) involved with that recent bust was granted licence during that period of time,” Ms. Dias added.

Mr. Bourne said the GMRA has restarted registering scrap metal dealers and exporters and has since lobbied the Irfaan Ali-led administration’s Ministry of Trade and Tourism to again recognise it as a interlocutor. “We need to be given the power, so-to-speak, from the ministry to make it mandatory for persons to be part of the association if they are to trade in scrap metal,” he said.

Ms. Dias said added that before 2015 no document could have been taken to the Ministry for a stamp without an endorsement by the GMRA. “But then, that was thrown out,” she added.

The association is urging the People’s Progressive Party (PPP) to reintroduce the system for all exporters to be registered with the GMRA and subject themselves to due diligence before they could be approved as scrap metal shippers.

The trade was previously closed in 2015 and reopened in 2017, association officials said.

The GMRA has taken its lobby publicly for the reopening of the trade, disagreeing with the Customs Anti-Narcotics Unit and the Guyana Revenue Authority (GRA) that a new scanner first has to be installed.

A coordinator of the United Nations Office on Drugs and Crime and the World Customs Organisation, Bob Van Den Berghe has been quoted as saying by InsightCrime as saying that  it is likely that the vast quantity of cocaine had been detected before leaving Guyana.

At the same time, he says on a smaller scale the use of  scrap metal to conceal outward bound drugs had been problematic for authorities worldwide. He says scanners can fail to detect small quantities of drugs in large loads of scrap metal.