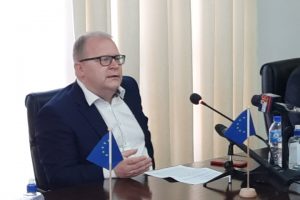 The European Union’s Electoral Observer Mission (EOM) on Friday stressed the importance of an overhaul of Guyana’s electoral laws and practices to avoid a repeat of the 2020 election fiasco centered around the results of district four.

“It’s obvious that this what happened last year should not happen again and I guess some changes at least in legislation concerning elections and then some of the technical practices should increase the possibility that it will not happen again,” Chief EU Observer  Urmas Paet told a news conference.

At the same time, he said the decision on whether the problems that plagued last year’s general elections should continue. “I would like to stress that the European Union stands ready to assist Guyana with the implementation of any of the EU election observation recommendations and with the election reform process in general,” he added.

The EU mission recommended that Guyana puts in place clear, written procedures for the transmission and tabulation of election results, and accompany declaration of results with simultaneous publication of detailed polling station results and digital copies of all Statements of Poll.

All regional and international observer missions had heavily criticised the tabulation process for Region Four for which the Guyana Elections Commission (GECOM) had issued several declarations. While A Partnership for National Unity+Alliance For Change (APNU+AFC) has not released its Statements of Poll, the recounted votes show that the results for all 10 electoral districts, including Region Four, were closest to the Statements of Poll that the People’s Progressive Party Civic (PPPC) had released.

High Court orders had been issued for the Region Four Returning Officer, Clairmont Mingo to follow the required tabulation procedures, but the then opposition PPP and observers had said they had not been followed. 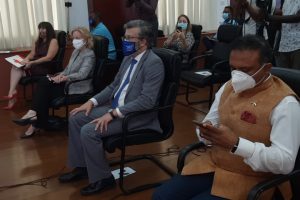 At the same time, APNU+AFC has maintained that the PPPC cheated the elections through impersonation of deceased persons and persons who had been overseas on March 2, 2020 – polling day, and the absence of documents to reconcile with votes cast.

Mr. Paet and key team members are scheduled to hold a roundtable discussions next week to discuss the 26  recommendations, eight of which are priority

They include campaign financing legislation and a  review and consolidation of laws that clearly set out procedures for tabulation and declaration of results, hold consultations on the overhaul and functioning of the Guyana Elections Commission, foster transparency and accountability in online and offline campaigning, transform the State-owned media into a public service broadcaster and have a comprehensive dispute resolution system.

The Chief of the EU Observer Mission said the time has come for Guyana to have one electoral law to allow politicians and voters to have a clear understanding. “One clear, complete electoral law that everything will be described what concerns elections and procedures and so on,” he said.

Acknowledging that the issue of political financing was possibly more controversial, Mr. Paet remarked that Guyana’s existing outdated legislation was unacceptable because the figure was very low. He said there are many unanswered questions such as the source of funds, the size of campaign budgets, spending of State funds on electioneering as distinct from pure campaign funds. “As long as these questions are not adequately answered, there is still space to develop,” he said.

For several decades now, EU, Commonwealth and Organisation of American States observer missions had recommended that campaign financing legislation be enacted. However, both major parties appeared to have had no appetite for it.