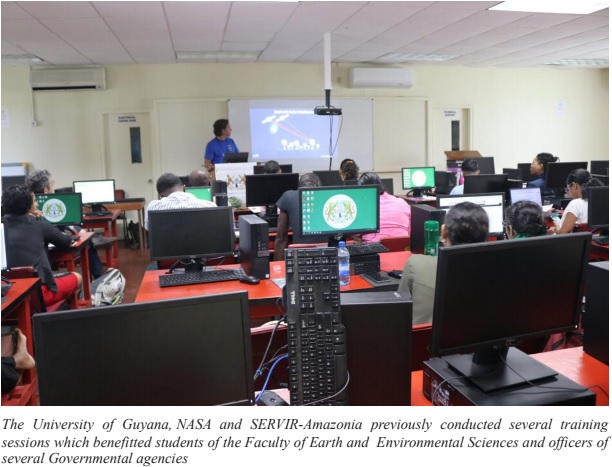 The University of Guyana (UG) says it will benefit from  an inter-institutional collaboration that will strengthen the development of information  services for mangrove mapping and monitoring.

Signing the  Memorandum of  Understanding (MoU) on Tuesday with UG were SERVIR-Amazonia and the National Aeronautics and Space  Administration (NASA).

SERVIR-Amazonia, a subsidiary of SERVIR Global, is part of a joint development initiative  by NASA and the United States Agency for International Development (USAID). The MoU will remain in effect until December 20 of 2023.

With the signing of the MoU, UG and the partners will prepare the nation’s Geospatial  Scientists for the monitoring of Guyana’s ecosystems which will be enhanced via academic  research. “The partnership will result also in the monitoring and evaluation of mangroves in  Guyana using the latest geospatial technologies and satellite imagery to map the extent and  structure of mangrove forests along the coastland,”  UG said in a statement.

UG adds that this will allow for both the Government of Guyana (GoG) and Civil Society actors to better  analyze mangrove-related land-use changes and act on hotspots of deforestation to stop them  on time.

“The data retrieved will allow for better land-use planning, policy-making and actions that  protect mangroves from being converted to other land uses, as well as to plan mangrove  protection efforts for farmers in low-lying coastal regions,” UG said.

UG says it will participate in the co-development of the mangrove monitoring platform, and support  the validation of data products with field data. It will also engage in workshops and training  events led by SERVIR-Amazonia and its partners, and participate in activities related to the  methodological development to monitor mangrove forests along Guyana’s Coast.

The signing of the MoU is the culmination of a series of workshops over the last 18 months  led by NASA scientists and those from UG’s Faculty of Earth and Environmental Sciences  (FEES) and Centre for Study for Biological Diversity (CSBD) which included over 15 GoG  entities.

Dr Temitope Oyedotun, Dean of UG’s FEES, who spearheaded the project, thanked all  partners for their unwavering support in sharing knowledge and technology.  He said the project was conceptualized with a conversation in 2018 and he is pleased that it  has blossomed into one that will benefit not only the University but also, the people of  Guyana and the Caribbean.

The Agreement was signed by the Professor Paloma Mohamed Martin, Vice-Chancellor Xi,  University of Guyana and Mr. Jesús Quintana, Managing Director for the Americas of the  Alliance of Bioversity International and International Center for Tropical Agriculture (CIAT) and attended by senior officials of UG and representatives of NASA and USAID.

In her remarks, Professor Mohamed said the University is aligned with Guyana’s goal as an  environmentally responsible State. She said the signing of the MoU with SERVIR-Amazonia and partners is part of a response to improve the use of geospatial data and information. The Vice Chancellor said too that via the historic signing of the agreement, the research  conducted will assist the University with the development of its Human Resiliency Systems programme, its new Geosciences programme, and Data Sciences programme now in its  developmental stage.

Similarly, Mr. Jesús Quintana celebrated this important milestone: “The Alliance of  Bioversity International and CIAT works on landscape and biodiversity conservation, as well  as on digital inclusion. Based on our joint research we can collectively innovate and design  better policies to confront the challenges the Amazon basin faces.”

SERVIR-Amazonia is part of SERVIR Global, a joint development initiative of the National  Aeronautics and Space Administration (NASA) and the United States Agency for Interna tional Development (USAID). Since 2005, SERVIR has worked in association with countries  to use the information provided by Earth Observation satellites (EO) and geospatial technolo gies. SERVIR-Amazonia is a five-year program (2018-2023) run by the Alliance of Bioversi ty International and the International Center for Tropical Agriculture (CIAT). SERVIR Amazonia connects geospatial and satellite technology to Amazonian communities through a  strong consortium with proven experience in sustainable development. This consortium in cludes government organizations, NGOs, and private sector and university institutions work ing in 6 countries: Brazil, Peru, Colombia, Ecuador, Guyana, and Suriname. The five partners  of the consortium include: The International Center for Tropical Agriculture (CIAT), Con servación Amazónica ACCA (ACCA), the Institute of Forest and Agricultural Management  and Certification (IMAFLORA), Fundación Ecológica ECOCIENCIA (ECOCIENCIA), and  the Spatial Informatics Group (SIG).

The Alliance focuses on the nexus of agriculture, nutrition and environment, working with  local, national, and multinational partners across Africa, Asia, Latin America and the Carib bean, and with the public and private sectors and civil society. With novel partnerships, the  Alliance generates evidence and mainstreams innovations to transform food systems and  landscapes so that they sustain the planet, drive prosperity, and nourish people.