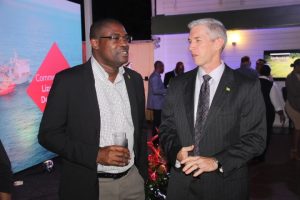 The opposition A Partnership for National Unity+Alliance For Change (APNU+AFC) on Friday pledged critical political support to confront ExxonMobil on key issues facing the oil and gas sector.

Contributing to the 2021 National Budget debate, APNU+AFC frontbencher, David Patterson publicly pledged political support to the governing People’s Progressive Party Civic in get the best from the burgeoning sector.

“We are willing to offer our support in presenting a united position so that jointly we can address the alleged inadequacies of the contract and any other documents including the environmental permit,” he said.

The Guyana government, since coming to office in August, has said that a new model Production Sharing Agreement (PSA) would be drafted, similar to efforts  that the coalition had been taking.

Mr. Patterson reasoned that once there was political unity, it would be harder for the those international partners to ignore Guyana’s concerns. “Moving forward, this issue is squarely in the hands of the government. The time for  grandstanding and blame is over. The time to act in the  best interest of the citizens is now,” said Mr. Patterson  who is General Secretary of the AFC.

That American supermajor is the only company that is discovering and producing oil from the prolific Stabroek Block offshore Guyana.

Mr. Patterson said while the coalition had been in office, the PPPC had never supported the coalition on anything except the border claims, a situation he said has created problems for Guyana dealing with some of  the problems that the sector was now facing. “The lack of a unified front has allowed various parties to exploit the differences which is not to the benefit of the country and its citizens,” he said.

However, he recalled that the David Granger-led administration had given ExxonMobil free reign to exclusively brief the  then opposition PPPC in “every discovery and development.” In contrast, Mr. Patterson said the Irfaan Ali-led administration has not been involving the opposition coalition and has allegedly asked that no information be shared. “This is in stark contrast to our handling of the sector and does not reflect the claim of inclusivity that the government has been speaking about,” he said.

Back in the 1970s, the then PPP had offered critical support to the leftist Forbes Burnham-led People’s National Congress (PNC) in the nationalisation of the then privately-owned sugar industry when both parties had unabashedly embraced socialism.

At the turn of the 1990s after Burnham died in 1985, the PNC under the Desmond Hoyte presidency had transformed itself to being market-oriented and the PPP,  on coming to office in 1992, continued those IMF/World Bank-inspired economic policies. The PPP has been sparing no effort in committing itself to private sector-led growth and has been scoffing at APNU+AFC criticisms that its national budgets are pro-business sector.