Guyana to get 80,000 COVID vaccines from India 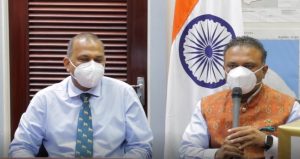 India will be donating 80,000 AstraZeneca COVID-19 vaccines and they are scheduled to arrived in early March, the Health Ministry announced Friday.

The ministry said that information was provided India’s High Commissioner to Guyana, Dr. K.J. Srinivasa to the Minister of Health, Dr. Frank Anthony

That donation is among others being reportedly made to countries in Africa, Asia and the Caribbean. The Indian envoy said donations would also be sent to other CARICOM Nations such as Suriname, St. Kitts and Nevis and Antigua and Bermuda, among others.

This vaccine was previously awarded Emergency Use status however it was recently approved by the World Health Organisation (WHO) for global use. In his remarks, the Minister of Health, Dr. Frank Anthony emphasized that this is very good news since the experts believe that once the vaccines are being used it would help to confer herd-immunity in the population. “Once we can develop our immunity, it means that we can be COVID free,” he noted.

The Minister explained that there is a scramble for vaccines globally with the COVAX Facility at the forefront who has been trying desperately to coordinate the global effort for most countries. In this regard, India has proved to be a shining light.

“You have a quite a large population and despite the needs that you have internally, you have decided to share with the rest of the world, the vaccines that you have,” Dr. Anthony was quoted as saying in a statement.

The Minister reportedly emphasised that Guyana has developed a vaccine deployment plan that includes 14 cold-storage sites in various regions and the training of 35 Vaccination Teams capable of administering 7,000 vaccines daily. Dr. Anthony added that if the need arises additional teams can be trained to boost the vaccination roll-out.

The Indian High Commissioner recalled that Guyana’s first batch of vaccines, which were donated by Barbados, was from a similar mechanism the country will be benefiting from now.

While speaking on the Serum Institute, Dr. Srinivasa noted that prior to COVID-19 the Institute provided close to 45% of the world’s vaccines such as Polio, Hepatitis and DPT.

With regards to India’s vaccination programme, Dr. Srinivasa indicated that the process commenced on January 16, 2021 and to date about 12 million front-line workers have been vaccinated. “We have a goal of inoculating about 30 million frontline workers by the end of March,” he said. This phase will also include health care providers at the private health facilities.

It was also explained that India will also be actively working on donations across the world. “So far we have donated more than 8 million vaccines across the world…we have donated already to over 30 countries and another 90 countries are in the queue,” Dr. Srinivasa said. Additionally, India has committed to donate about 10 million vaccines to Africa; 600,000 of which were airlifted earlier this week. Two hundred thousand vaccines were also committed to the UN health workers.

The High Commissioner also disclosed that the Serum Institute is working closely with the COVAX Facility so as to ensure that many countries receive much needed vaccines.

Dr. Srinivasa reiterated his government support to all the actions taken by the government of Guyana to combat the COVID pandemic.