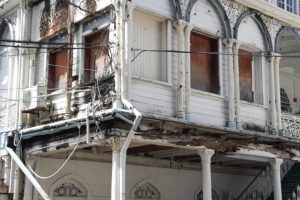 “One hundred million dollars have bee set aside  for the restoration of City Hall and we are going to do it. The People’s Progressive Party Civic is going to do it , something that APNU (A Partnership for National Unity) could not do in thirty-something years of being in government,” he said. The People’s National Congress (PNC) was in office from 1964 to 1992 and, through its dominated APNU+Alliance For Change coalition, from 2015 to 2020.

Under the coalition, the rotting City Engineer’s office, also located in City Hall compound, had been rescued from further deterioration. 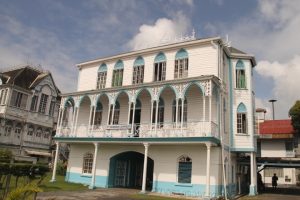 The European Union (EU) in July, 2018, following an assessment of the condition of City Hall, has estimated that rehabilitation works would cost almost GYD$1 billion.

“This is an initial sum. We expect this Project to be done over a period of time. It will require great expertise, patience and skilled workmanship,” he said. 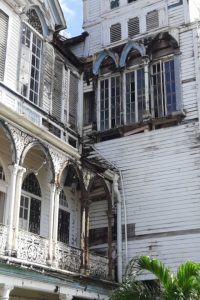 Crumbled walls and windows of the City Hall.

The Local Government Minister said government would not expect rehabilitation of City Hall to be completed this year and so “more resources would be allocated in due course.”

A specific time frame has not been earmarked for completion of the building whose main beams are very rotten. Windows, walls and stairs have been crumbling on an almost daily basis.  Sections of the colonial-era structure have been vacated or considered a threat to safety.

The windowless Mayor’s Parlour is no longer being used and the auditorium, once a popular venue for concerts, public fora, receptions and other events, has been condemned because of weakened stairs, walls and a badly leaking  roof.

City Mayor Ubraj Narine has said that the City administration has opened a special bank account for donations towards the City Hall Rehabilitation Fund. He has also said that efforts to secure funds from ExxonMobil for that purpose have been unsuccessful.