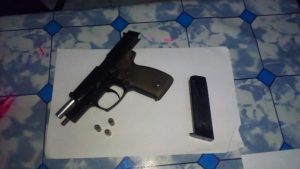 The gun and ammunition that police said were found in possession of aman who allegedly threatened his wife.

A man, who allegedly threatened his reputed wife with a gun, was arrested after a weapon and ammunition were found in his possession, police said.

The Guyana Police Force said at about 11:45 PM police were on patrol in Georgetown when they received information of a 911 report of domestic violence in Georgetown.

On arrival at the location,  police saud contact was made with the 911 caller who told the ranks that her reputed husband threatened her with a firearm.

The ranks contacted the suspect where a search was conducted on his person and one 9mm pistol with the serial number filed off along with a magazine containing three live 9mm rounds were found in his pants crotch,” police said

He was arrested and escorted to East La Penitence Police Station pending charges.