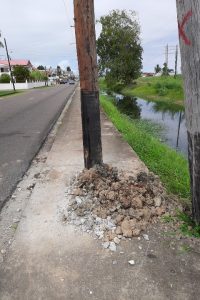 The Guyana Power and Light (GPL) has admitted that the planting of utility poles in the Lamaha Street pavement was as a result of “bad judgement” by employees, even as the National Commission on Disability (NCD) frowned on the power company’s decision.

Ms. Sears said GPL did not ask the City administration for permission, and City Mayor Ubraj Narine said officials were expected to examine the issue.

NCD Programme Officer, Sondra Davidson-Lowe expressed shock at GPL’s planting of poles on the pavement, saying “we have to write them (power company) because if we have a PWD (person with disability) or a blind person, that’s a problem.”

The NCD’s Advocacy and Communications Officer, Avonelle Corrica told Demerara Waves Online News that the Commission would formally request a meeting with GPL to address the issue. “Definitely, that should not occur. You can’t put poles on pavement and we have a section of the population, PWDs, who are vulnerable.”

Ms. Corrica said the NCD would also be reaching out to the power company  to sensitize the officials because “it shows clearly that maybe they are not aware of the content of the Disability because if they read the Disability Act they would not have done something like that.”

The Disability Act provides for  GYD$100,000 and six months imprisonment for anyone found guilty of obstructing pathways.

However, Ms. Corrica said the lack of enforcement of the law was recently addressed in talks with Minister of Human Services, Dr. Vindhya Persaud and a commitment was given to make amendments.

The spokeswoman does not believe that the police are fully aware about the Disability Act, but she noted that the Commission usually holds sessions with police recruits at the Felix Austin Police Training Commission.