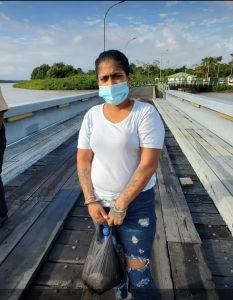 A woman, who was wanted by Guyanese police as part of an investigation into the killing of an elderly West Demerara shop owner, has been handed over by Surinamese police to their Guyanese counterparts.

Police say she was wanted for escaping from lawful custody and a probe into the murder of businesswoman, Bibi Ramjit, of La Grange, West Bank Demerara.

Ms. Khan was arrested on Wednesday and she was handed over to Guyanese police by Suriname authorities.

Ramjit, known as ‘Aunty Bibi’, a shop owner of Old Road, La Grange, was found bound and gagged on October 25, by neighbours.