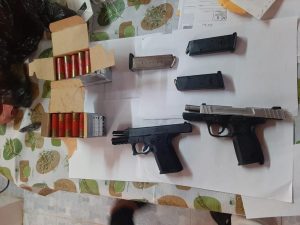 The guns and ammunition that police say they seized from a house at Port Mourant, Corentyne.

Three men were Tuesday  granted bail after appearing in court for unlawful possession of weapons found in their possession by police.

Police say they found two 9 MM pistols,  three magazines, thirty-two 9mm live rounds and fifty twelve gauge shotgun cartridges in a house at Port Mourant, Corentyne one week ago. The firearms and ammunition were lodged and the suspects were  arrested and placed in custody.

Investigators say the owner of the property, who is a businessman, a 28-year old man  of No. 73 Village Corentyne and a 39- year old male of No. 1 Road, Corentyne who were all occupants of the house were arrested.

The accused men are Romeo Singh of Port Mourant, Deon Poonai of No. 73 Village and Sammy Kristamma of # 1 Road.

They appeared on Tuesday at the Whim Magistrate’s Court before Magistrate Rabindranauth Singh and were each granted $250,000 bail.