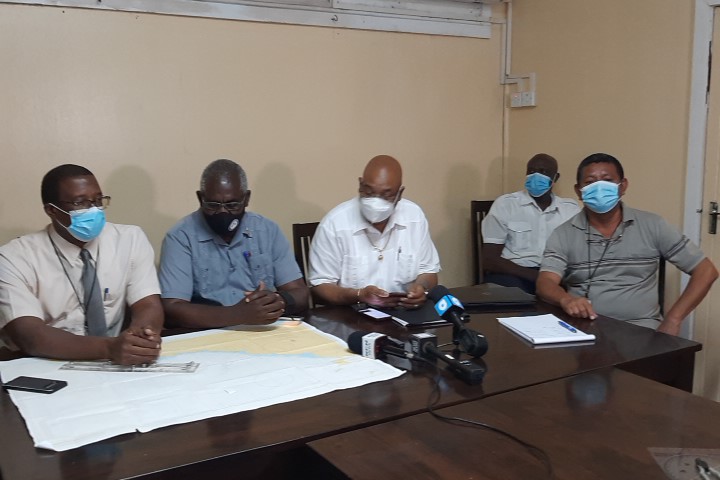 Search and recovery experts believed that a vessel, with a number of decomposed bodies, seen adrift in the Atlantic sea offshore Guyana might have drifted from as far as Africa and eventually sank overnight Monday in bad weather.

Director Maritime Safety, Retired Coast Guard Commander John Flores said the vessel, which is fairly deep, might have accumulated sea water or rain water due to “very bad weather.” “It probably could have sunk or become water-logged and went down.  We are not quite sure as yet but the weather was very bad last (Monday) night,” he said.

Mr. Flores said the open vessel seemed to be a river craft which made it more susceptible to flooding by rain or sea water,

Minister of Public Works, Juan Edghill said a tug working for ExxonMobil, on Monday about 14:04 hours spotted the vessel  of unknown origin, with five to 10 “unidentified lifeless bodies” , more than 112 nautical miles from the coast and immediately alerted the Maritime Administration (MARAD).  He said that investigations have already revealed that no boat or crew was reported missing in Guyana.

He said the tug stayed with the vessel and eventually got approval to throw a line and tow it in to the sea buoy or pilot station near the mouth of the Demerara River. However, that effort was unsuccessful and eventually the vessel drifted further westward. Commander Flores added that, “the weather was very bad last night because that is the main reason why the tug could not get to work last night. It was because of the weather and we couldn’t get quite near to the boat.”

Although the tug crew was asked to “keep an eye” on the vessel,  he said it was last seen at 18:53 PM when it was 83 nautical miles offshore Guyana and drifting westerly at 2.9 knots per hour.

Mr. Edghill said contact was made with neighbouring Suriname to ascertain whether they had any reports of a missing boat. Doubting whether the boat might have originated from Trinidad and Tobago or Venezuela, he said from all accounts the boat came from a western direction, probably as far as Africa. “This could be a boat coming even off of Africa, based on the direction and how it was drifting and as you can see the boat doesn’t have an engine attached to it and it has a tow-line in the front from the pictures and we are very distressed that a boat without an engine and an active tow-line that you can see,” he said, adding that this raises a number of possibilities including piracy.

The Public Works Minister said if search and recovery efforts fail on Wednesday, government would consider widening its search area without encroaching on the territorial waters of neighbouring States and would also reach out internationally. “If by tomorrow (Wednesday) midday that 31 miles, there is no visibility and we haven’t captured the boat, I guess at that stage the engagement at a higher level would have to be there to see how we could run the various searches and try to find clues as to where this boat originated internationally,” he said.

Based on projections, the boat should be 31 miles off Waini, North West District.

He said the GDF Coast Guard, with assistance from the private sector, and the Air Corps have been deployed in search of the boat. The Public Works Minister also added that ExxonMobil-hired helicopters have been asked to keep a watchful eye out for the vessel.