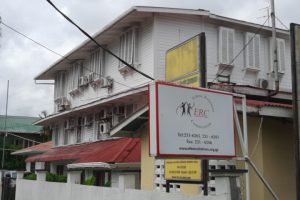 The headquarters of the Ethnic Relations Commission located at Peter Rose and Anira Streets, Queenstown, Georgetown.

The ERC says five of them have pleaded guilty and have been fined.

Three of them allegedly committed the offence in December, 2020 and four in January, 2021.

Barakat will return to court on March 1, 2021 for trial before Magistrate Leron Daly while Rampersaud’s matter was adjourned to March 19 by Magistrate Peter Hugh at the Fort Wellington Magistrates Court, West Coast Berbice.

The charges were filed under the Racial Hostility Act and for causing racial or ethnic violence or hatred under the Representation of the People Act.

The ERC, in a statement, is urging citizens to promote tolerance and understanding towards those of different ethnicities for a better country.

The commission says it is working vigorously to stop the spread of racial incitement among Guyanese, especially on social media.