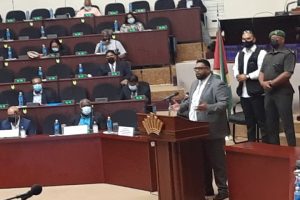 The Guyana government on Monday cautioned businesses against racking up the cost of goods and services because that would reduce the country’s profit share, but said future Production Sharing Agreements (PSA) would ensure this country earns much more from the oil and gas sector.

“The oil companies would have to understand that they would have to work differently in Guyana,” Vice President Bharrat Jagdeo said.

He also said businesses should guard against charging higher prices for their goods and services because the country would lose profits.  “Margins of preference, we have to look at that too, but it can’t be to the extent that they push up the cost because we want to lower Exxon’s cost. To the extent that we lower their cost, we have more money for profit oil,” Vice President Bharrat Jagdeo  told a consultation on the draft national local content policy.

Vice President Jagdeo remarked that foreign companies were coming to Guyana and hiring doctors at a fraction of the cost in local rates and possibly billing the oil companies at United States rates. He said that was not confined to medical services.

Under the existing Production Sharing Agreement, Guyana is entitled to 12.5 percent of revenue as profits with the remaining 12.5 percent for the company’s profits and 75 percent as cost of investment and operations.

Mr. Jagdeo added that of there if there are lower labour costs by directly hiring Guyanese, the company and Guyana should benefit rather than sub-contractors. “Who benefits if we directly contract them? The company because there will be more for profit oil…and then we satisfy three objectives: the company makes more profit, the government gets more revenue and you have a local person doing the work so that differential could be captured through lowering the cost oil and greater profit margin,” said Mr. Jagdeo, an economist and former Finance Minister.

The Vice President suggested that the exploration and production phases might have to be separated because there is limited scope for local companies in production.

President Irfaan Ali said legislation and regulations would be put in place to set achievable targets of local content for Guyanese to benefit more. He stressed that there would be strict system to ensure that companies comply with the policy and build human capacity. “An important part of the local content policy is accountability and the government has an important responsibility in ensuring there is accountability through the audits, through the monitoring and evaluation so that also will be part of the local content policy and how do we hold you accountable to the policy,” said Dr. Ali.

Government wants Guyanese significantly in the areas of skilled jobs, brokerage, transportation, building construction and rentals. Mr. Jagdeo emphasised the importance of Guyanese benefitting from the oil sector. “Out people have to feel this prosperity. They have to be trained in the sector. There has to be more spent on training of our people and building capacity, even with capacity to monitor the industry,” he said.

He assured that the local content policy was not aimed at putting investors at a disadvantage, but fulfilling an election promise that they would get more from the oil and gas sector. “The local content policy was not created to disincentivise investment but it’s a promise that we made to our people about shared prosperity and this has to happen,” he said.

The Vice President said the local content policy would be bolstered in the future by a Production Sharing Agreement aimed at getting more resources for Guyanese to whom the resources belong. “We took a conscious decision, as a political party and now a government, that we will not renegotiate that contract because we believe in the sanctity of contracts but made it very clear to the companies in the sector that any future PSA, and for all of those companies who will have to come to the government to negotiate a PSA, the conditions will be very different and they will evolve in the direction of greater benefits for Guyana,” he said.

While he observed that the existing PSA was advantageous to the oil companies, he reiterated that existing contracts would not be renegotiated and in the future the PSA would not corner investors. “We want to assure the oil companies, notwithstanding what I just said there, that we are not going to be populist. We are not going to make it so unrealistic- the PSA- that it becomes a disincentive for them to invest here when we believe the sector can produce healthy remuneration for the investors but yet contribute more to Guyanese and their development,” he said.

Mr. Jagdeo acknowledged that Guyana might have limited capacity in some sectors, but there was need for a law and policy to force the companies to act differently.

Touching on the issue of 60 to 90 days credit to big companies, Mr. Jagdeo urged them to consider paying their debts within 30 days. “The big companies, sub-contractors, with healthy credit ratings and deep pockets can afford to do that. Small companies cannot,” he said.