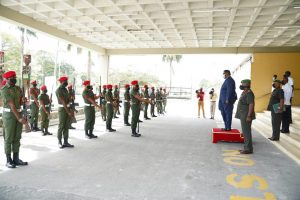 President Irfaan Ali taking the salute on arrival at the National Cultural Centre for the opening of the 2021 Officers’ Conference.

President Irfaan Ali on Thursday said no foreign military bases would be established in Guyana unless requested and that Guyana would independently decide who are its friends.

“Guyana will be no pawn or puppet of any foreign power. No foreign power will establish a presence that we,  we Guyana and the Guyana Defence Force do not request but we’ll exercise our sovereign rights to choose our friends and to enter into agreements which will enhance our defence force capability and our people’s development,” he said in unveiling Guyana’s  national defence policy in his address to the opening of the 2021 GDF Officers’ Conference.

The United States (US) Southern Command has already ruled out setting up bases in other countries of the Americas.

For years, there have been lingering concerns in some quarters that the US might be interested in using Guyana as a staging ground to overthrow Venezuela’s Nicolas Maduro administration. Venezuela recently expressed concern about joint Guyana-US Coast Guard operations in Guyanese waters to counter illegal, unregulated and unreported fishing.

The President’s foreign policy position about Guyana’s friendship also comes less than one month after his administration scrapped an agreement to establish a Taiwan Office in Guyana after strong objections from China. Guyana has since reaffirmed its commitment to a One China policy.

The US had welcomed the agreement between Taiwan, regarded by China as a renegade province, and Guyana.

At the same time, President Ali said Guyana would continue to hold joint and multilateral military training exercises with Caribbean, United States and Caribbean counterparts and receive non-lethal donation. “Relations with friendly militaries  and States will be founded on friendship and cooperation,” he said.

GDF Chief-of-Staff Brigadier Godfrey Bess announced that more than 1,000 troops from CARICOM, which includes the Regional Security System member States, United States, Canada, United Kingdom, France and The Bahamas. “The aim is to strengthen regional security and partnership and at the same time expand  the region’s inter-operability with the United States of America,” he said.

The President said Guyana would soon be acquiring more aircraft and vessels to adequately monitor Guyana’s Exclusive Economic Zone (EEZ), even as he urged the defence force to maximise the use of appropriate technologies and intelligence. “The force will continue to recapitalise. It will benefit from the acquisition of equipment, aircraft and marine vessels which will allow it to exercise improved surveillance over Guyana’s territory- it’s land, territorial sea and Exclusive Economic Zone,” he said. The President said the GDF’s capacity would also be enhanced to respond to threats and natural disasters.

The Chief-of-Staff added that “suitable vessels” would be sourced to “adequately dominate our EEZ.”

Brigadier Bess told the opening of the officers’ conference that there would be increased patrols and surveillance “so that we can dominate more of our land, air and sea spaces mainly the EEZ, rugged hinterland terrain and porous borders.

The GDF Chief-of-Staff said two Cessna planes and a Beechcraft King Air plane are being prepared for use by the Air Corps fleet. Those planes had landed in Guyana illegally and were believed to have been involved in illegal activities including narco-trafficking.

Referring to recent incursions by Venezuela’s military in Guyana’s waters and taking away of fishing boats to that country as well as the forcible removal of seismic vessels from offshore Guyanese oil concessions, he said there should be no repeat. “This should never happen again. These production assets must be secured and Guyana’s entire Exclusive Economic Zone must be protected at all cost,” he said.