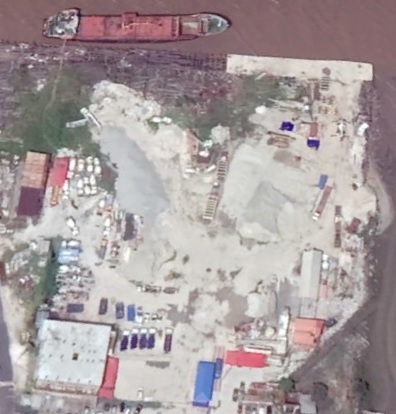 The Guyana government has moved to the High Court to repossess the BK Marine Inc. Wharf in Kingston, Georgetown because it was sold at just over GYD$200 million although it is worth GYD$5 billion.

Attorney General Anil Nandlall is asking the High Court to declare that BK Marine “has been unjustly enriched” by about GYD$5 billion as that “is the true representation of the value of the property” at Mudlots 1 and 2, Lot F of Mudlot 3 and Lots A, B and D, North Cummingsburg, Georgetown.

“The unlawfulness, recklessness and negligence which permeated this  transaction is evidenced by the fact that not even a formal Agreement of Sale in writing was executed between”  BK Marine and NICIL “for such a valuable public asset.”

Further, he wants the court to order the return to the property, well-known as GRDB Wharf, and to “deliver up possession” of the said property.

The Attorney General further contends in court papers released to the media that BK Marine is not eligible to buy the former GRDB Wharf located at Mudlot because the company failed to build a  hotel, restaurants and wharfage facilities, but instead constructed a ReadyMix concrete plant allegedly without approval from NICIL.

Mr. Nandlall wants the High Court to order the Registrar to scrap the lease for the property, saying

Mr. Nandlall noted that BK Marine had asked for an amendment to the business plan because of a “global financial crisis” but the entire process was never completed. “However, the purported Deed of Amendment was never executed and therefore the terms and conditions of the Agreement of Lease remained binding upon the Lessee,” the Attorney General says in the court papers.

The Attorney General said BK Marine was sent a letter dated October 25, 2011 stating that NICIL would be willing to transfer the leased property at a sale price of GYD$110,000,000 plus VAT after all lease payments including arrears (plus VAT) were settled and made current up to the date of completion of the sale transaction and logical adoptions / amendments being made to the existing Lease Agreement:

The High Court declarations being sought against BK Marine by the Attorney General are that the Agreement of Sale dated October 23, 2017 between BK Marine and NICIL held under Transport No. 634 of 2020 dated July 21, 2020 is illegal, unlawful, null, void, repugnant and contrary to Public Policy and  that the transport was obtained unlawfully, illegally and by fraud;

Further, the State is asking the High Court to order the Registrar of Deeds to set aside that transport on the ground that it was obtained unlawfully, illegally and by fraud or set it aside as being obtained by an illegal instrumentality, that is, “the breach of the fiduciary duty by the then Finance Minister” relating to his constitutional duty to the people and State of Guyana.”

The High Court is also being asked to declare Vesting Order No. 50 of 2020 made by the former Finance Minister and advertised in the Official Gazette on the 28th March, 2020, is illegal, unlawful, null, void, repugnant and contrary to Public Policy having been made by Mr. Jordon in alleged breach of his fiduciary duty to Guyanese.  Mr. Nandlall said a mere 10 percent or $20,260,276 of the purchase price had been paid. Further, an application has been made for the court to declare that the Vesting Order is null and void and incapable of effecting Transfer of Title of the GRDB wharf to BK Marine.

Then Head of the Privatisation Unit of NICIL, Winston Brassington had on 4th December, 2006 and Mr. Brian Tiwarie of BK Marine had signed a lease agreement for the GRDB Wharf for 20 years after which the company could have purchased the property for GYD$110 million.

Further, the agreement states that within four years of the Mayor and City Council’s approval  of the Lessee’s construction plans, the scope of works but if he failed to do so within that time-frame, NICI would issue a six-month notice of default to complete the works.  completed. If the Lessee fails to complete said scope of works at the end of the four (4) years, the Lessor shall issue a six- month notice of default to complete the works within that notice period. “If this date passes, without substantial completion, then the option price…shall become null and void and the option price  thereafter will be subjected to mutual agreement.

BK Marine had agreed to pay an annual rent of GYD$10 million plus VAT in monthly installments of GYD$833,333 plus VAT.

BK had agreed to to use the land to operate a tourism/ office/ wharf facility for the purpose of developing a state of the art hotel with restaurants, shopping and office areas and adjoining facilities that are conducive to the storage of, importation and exportation of goods such as cement fertilizers, machinery, spares, equipment and hardware. Included in this Business Plan was the construction of a hotel, skybridge restaurants and bars, facility for docking of cruise liners/ floating hotel/ ocean going vessels, roof garden with view of river/ ocean and city Offices including customs department, a mall Guyanese craft shops, an warehouse to handle import/export trade facilities for purchasing/ processing export of agricultural produce

The company had said those facilities would have been built within 12 to 36 months at a cost of US$6 million with the aim of employing 300 persons  by the developer and another 200 by other concessionaires.

The Attorney General is relying on a letter as late as March 31, 2017 for GYD$81.3 million for lease rental including interest of GY$19.5 million.  Records also show that BK Marine owed the Georgetown City Council GYD$6.3 million in rates and taxes for 2015.

Mr. Nandlall notes that although the Registrar of Deeds had taken BK International to court for continuing possession of the property although owing GYD$49.6 million, the new NICIL Board of Directors after the government changed in the March 2015 general elections did not continue with the case or scrap the agreement but instead went ahead and sold the company the property.

‘The Attorney General said that on the 23 October, 2017, Horace James, Chief Executive Officer, NICIL  wrote to BK International Inc. negligently, in breach of his fiduciary duties, unlawfully and conspiratorially counter proposed to the offer to purchase and offered to sell the property for GYD$202,602,759. “This act by the Fourth Named Defendant was reckless, negligent, unlawful, in  breach of fiduciary duty and constituted a fraud upon the shareholder thereby causing the said shareholder and by extension the State of Guyana to suffer loss and damage.

According to Mr. Nandlall, the price at which the property was sold to BK Marine was at a gross undervalue and way below market price in relation to comparable and competitive facilities of a similar nature, form and usage which was sold consistent with the market value.