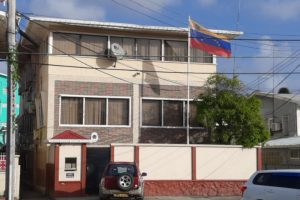 The Venezuelan Embassy in Georgetown.

Venezuela’s military  three days ago intercepted two Guyanese fishing vessels in Guyana, and the Foreign Affairs Ministry has since called for the immediate release of the crew members.

Details are sketchy about the ownership of the vessels- Lady Nayera and the Sea Wolf which were intercepted on Thursday, January 21, 2021 off the the coast of Waini Point in Guyana’s Exclusive Economic Zone (EEZ).

The Venezuelan  naval vessel, Commandante Hugo Chavez GC 24 reportedly escorted the vessels and crew members to Port Guiria “where the boats and crew have been detained.”

“The Ministry of Foreign Affairs is currently seeking to ascertain the status and welfare of the crew members,” the Foreign Ministry said. The Guyana government insisted on the immediate release of the crew and vessels.

Guyana has, in turn, accused Venezuela of violating its EEZ and contiguous zone by having its naval vessel enter.  “The Venezuelan vessel was illegally manoeuvring within Guyana’s EEZ and Contiguous Zone when it intercepted, boarded and commandeered the Guyanese fishing vessels,” the Foreign Ministry added.

Guyana said it condemned in the strongest possible terms “this wanton act of aggression by the Venezuelan armed forces against Guyana and Guyanese citizens.” “This Venezuelan action amounts to an interference with the sovereign rights of Guyana in its EEZ, contrary to international law,” the Foreign Ministry added.

Guyana said noted that this latest hostility follows closely on the heels of a Decree recently issued by President Nicolas Maduro which purports to establish “a new maritime territory of Venezuela called ‘Territory for the development of the Atlantic Façade’”, encompassing Guyana’s territorial waters, EEZ and continental shelf, as well as its land territory west of the Essequibo River.

“Guyana has emphatically condemned this Venezuelan Decree as a flagrant violation of its sovereignty and sovereign rights, and of fundamental rules of international law,” said the Foreign Affairs Ministry.

“The international community will be kept informed of all actions undertaken by Venezuela to undermine the sovereignty and territorial integrity of Guyana,” the Foreign Ministry added.

Venezuela has in recent weeks ratcheted up its rejection of the decision  by the International Court of Justice (ICJ) that it has jurisdiction to hear Guyana’s case and to reconfirm that the 1899 Arbitral Tribunal Award is the full, final and perfect settlement of the border between the two countries. Venezuela maintains that the ICJ does not have jurisdiction to hear the case and that the border controversy should be settled bilaterally through negotiations, an already 50-year long process that Guyana has said has not borne any results.

Venezuela has responded by issuing the decree to unilaterally establish its  maritime boundary up to the western bank of the Essequibo River. President Nicolas Maduro has also formally asked the United Nations Secretary General, Antonio Gutteres to restart bilateral negotiations.