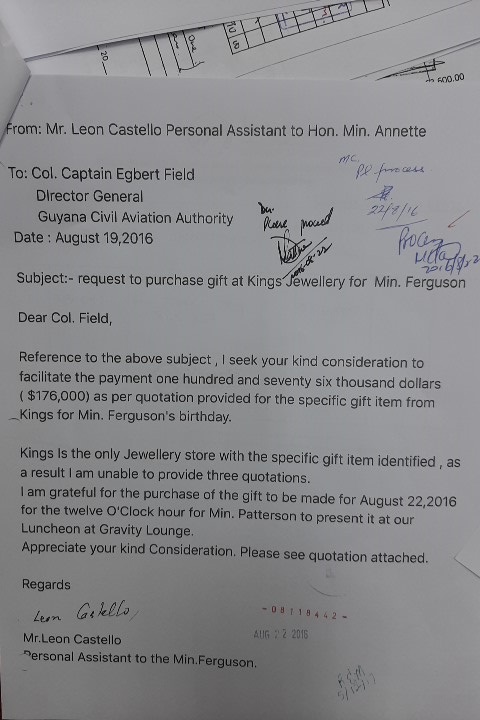 Minister of Public Works, Juan Edghill on Tuesday said a number of agencies under his ministry has provided records showing the names of former Ministers of Public Infrastructure being associated with the purchase of mostly jewellery as gifts for them.

The records show that separate purchases had been authorised by the relevant accounting officers of the Maritime Administration, Transport and Harbours Department, Guyana Civil Aviation Authority and the Cheddi Jagan International Airport.

He plans to call in thee Auditor General’s Office and the police, against the background of former Minister Patterson already stating that he had not received gifts of jewellery valued more than GYD$500,000 funded from the coffers of the Demerara Harbour Bridge’s Asphalt Plant.

“If (former) Minister Patterson says continually that he never received these gifts that his public officers have provided documentary evidence to show that they bought birthday gifts and you see it’s a ‘May’ thing, it’s his birthday, then it would have to be a police investigation,” Mr. Edghill said.  The Minister said he expected the officers to file complaints to to the police and the Auditor General would also be called. “This is not going to be just a ‘walk-in-the-park my word against your word’. This is public monies,” the Public Works Minister said.

The then  Junior Public Infrastructure Minister Annette Ferguson late Tuesday night declined to comment about whether she had received gold jewellery as birthday gifts from agencies / departments of that ministry.

He said outgoing General Manager of the Demerara Harbour Bridge, Rolston Adams was the whistleblower about the extent of the gift-giving functions.

The Public Works Minister hoped that the beneficiaries have properly declared their assets to the Integrity Commission or they could face criminal prosecution. “I think it’s time the Chairman and the entire Integrity Commission take notice of what is now in the public and start their investigation,” he said. 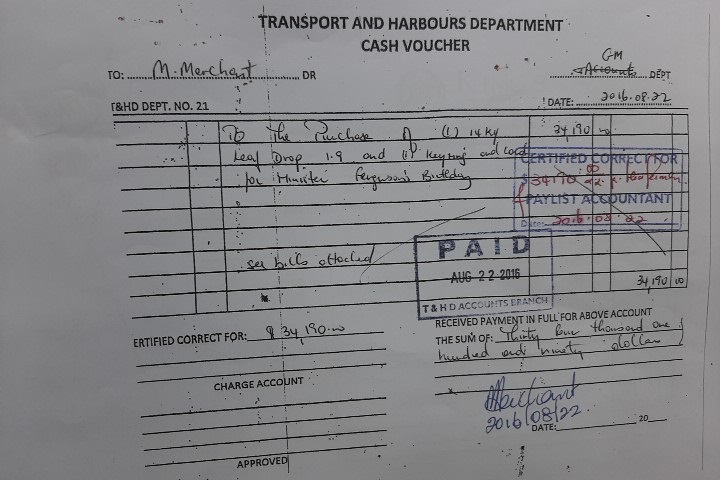 Mr. Edghill also produced a list of items, including beds, that had been donated by the Demerara Harbour Bridge to the Ministry of Public Infrastructure, to the total value of GYD$$6,757,175.  The list names Ms. Ferguson as having received one Samsung Edge 7 phone valued GYD$203,000, one screen protector valued GYD$2,900, one rugged armour case valued GYD$5,104 on July 12, 2016. The list also shows that then Senior Minister of Public Infrastructure, David Patterson had bee assigned one  Dell Latitude E7450 Laptop valued GYD$382,822 and one Apple iPad valued GYD$233,750

Records also show that the Maritime Administration processed  two separate payments to Steve’s Jewellery for “gift items” on May 2, 2020. However, none of the records, including two receipts that were provided, listed the items that had been purchased. One payment was for GYD$387,486 and the other was for GYD$704,292. “I believe what bothers me most and I am agonising over is that May 2020 was after the no-confidence motion,  it was after the March 2nd, 2020 elections. In the middle of a heightened period of court cases and determination of what was taking place, heading for a recount and the then Minister who was squatting in office (allegedly) received gifts from the Maritime Department,” Mr. Edghill said. 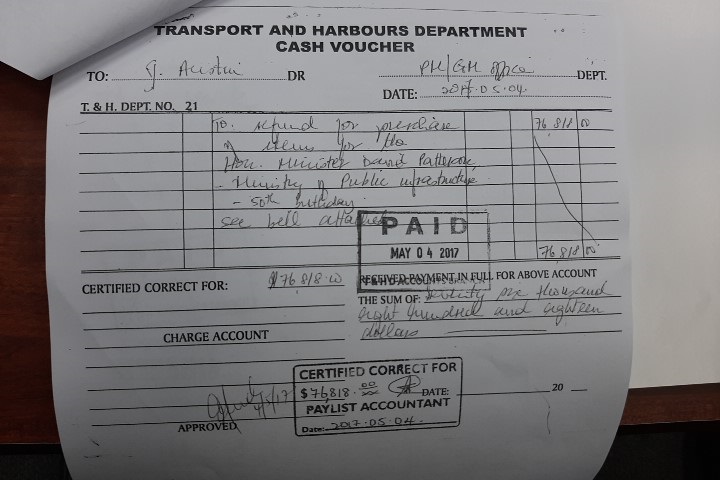 Back on August 24, 2017, Ms. Ferguson’s name has been mentioned in records for the procurement of earrings valued GYD$68,700 for her “birthday celebration” with funds from the Guyana Civil Aviation Authority.

Documents also show that one pair of gold earrings valued GYD$50,000 was purchased from L. Seepersaud Maraj on August 24, 2018 in accordance with a requisition by a Personal Assistant for an advance on August 24, 2020.

Similarly, Transport and Harbours Department requested GY$34,190 to purchase one 14 karat leaf drop from King’s Jewellery, one keyring and one card for Ms. Ferguson’s birthday.

Most of the low cost purchases that were associated with Ms. Ferguson’s name were under GYD$100,000. The Cheddi Jagan International Airport purchased jewellery for GYD$63,600 on August 23, 2018 and the Asphalt Plant did so on 19th August, 2016  for the equivalent of GYD$216. The Demerara Harbour Bridge on August 29, 2016 processed a payment for GYD$49,000 for the purchase of a birthday gift for Ms. Ferguson. 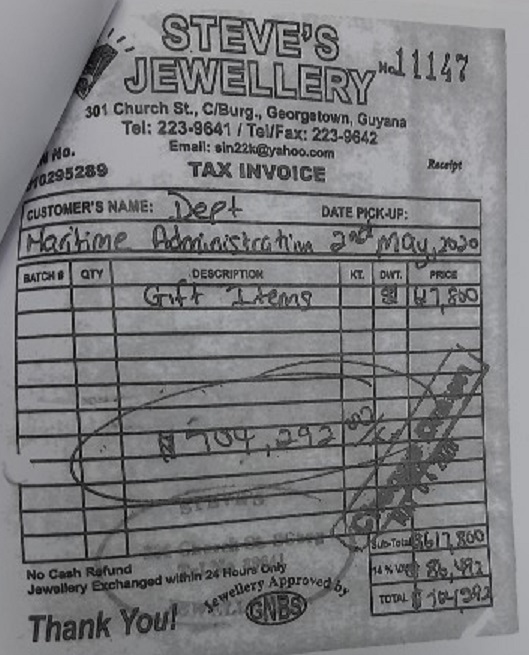 In one particular instance, records show that Mr. Leon Castello, Personal Assistant to Ms. Ferguson on August 19, 2016 had written to the Director-General of the Guyana Civil Aviation Authority (GCAA) asking for the payment of GYD$176,000 for the “specific gift item” that had been available only at King’s Jewellery and so he was unable to provide three quotations. “I am grateful for the purchase of the gift to be made for August 22, 2016 for the twelve O’clock hour for Min. Patterson to present it at our luncheon at Gravity Lounge

Mr. Edghill called the purchase of gifts amounted to “an abuse of privilege.”

The Public Works Minister said the outgoing General Manager of the Demerara Harbour Bridge has since decided to hand over the GYD$897,000 bracelet whose purchased he had authorised for himself in honour of International Men’s Day in November 2019. 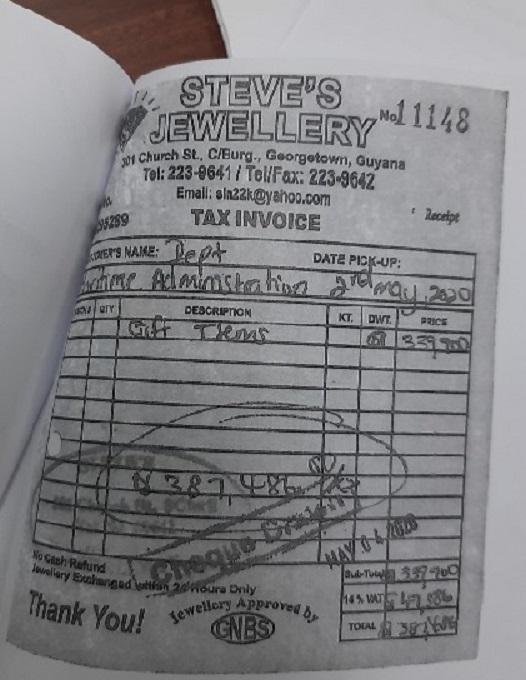 Asked if  the Heads of the  other agencies would be punished for facilitating those purchases, he said they have informed him that normally they would normally get a call about such birthday activities. He said he had no problem with gifts but he was clearly taken aback by those that were worth hundreds of thousands of dollars. “You would want to find out why did people go that length. I think there is a limit… I don’t see a need for penalising, at least not at this time, based on the explanations that they would have received especially if they have acted within moderation and with the approvals that were given or what was the expectation. Things happen in a political context,” he said.