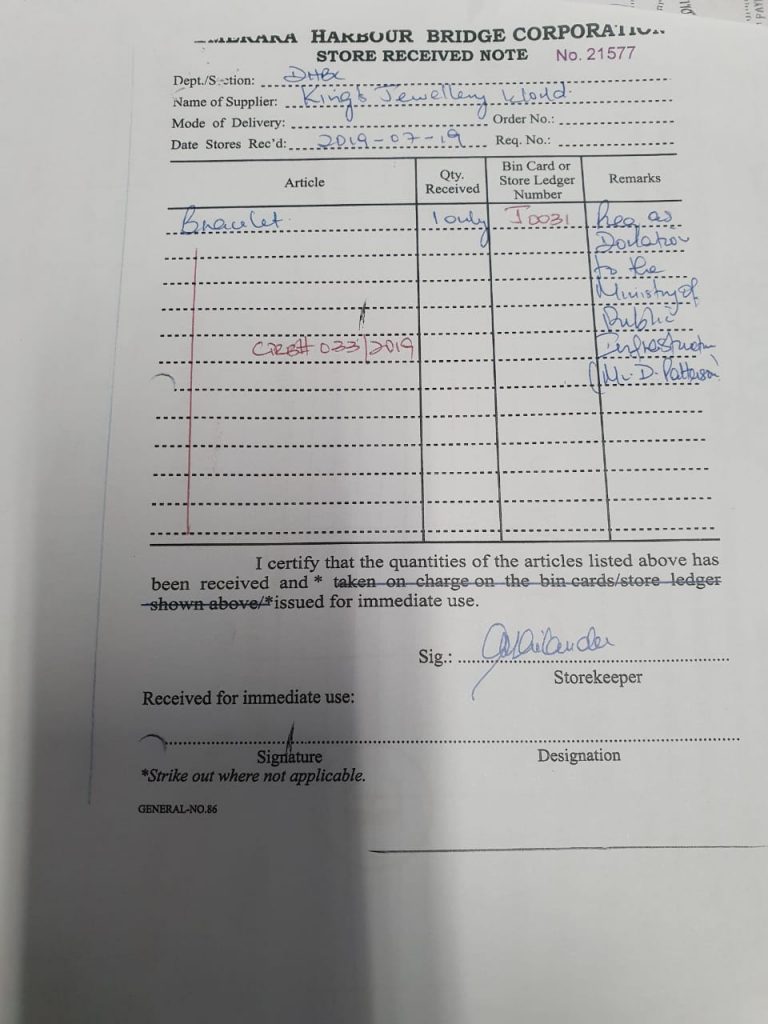 Even as former Public Infrastructure Minister David Patterson’s name on Monday continued to be associated with another pricy jewellery purchase, a wide-ranging  check has been ordered to ascertain whether similar items had been purchased by other agencies under that ministry, Public Works Minister Juan Edghill said.

Mr. Edghill also said the General Manager of the Demerara Harbour Bridge, Rolston Adams last week Tuesday began repaying the GYD$897,000 for a gold bracelet that he had authorised for himself as a gift in honour of International Men’s Day in November, 2019. “He said he has recognised that it is something that should not have been done in his own deliberate judgement, even before meeting with me, he has made those steps to repay the  money which I think is a highly commendable approach,” the minister said.

The Public Works Minister said the Board of the Demerara Harbour Bridge has decided to send home Mr. Adams, whose contract has expired, due to several lapses at that entity. He, however, noted that Mr. Adams has accumulated training and experience on the job which would be an asset to Guyana’s development. “I can say to you now, having spoken to him, the clear recommendation from the Board is for his removal…his removal from being the General Manager of the Harbour Bridge,” he said, adding that “the Board is not recommending him to stay at the bridge.”

Mr. Adams is expected to meet with the Public Works  Minister again on Tuesday. Similar discussions, he said, were scheduled to be held with at least four  senior managers and after that “we may have to drill a little deeper and ensure that the cancer is properly treated.”

The Minister said following his discussions with the General Manager of the Harbour Bridge, he has asked the heads of several agencies that fall under his ministry to submit all the vouchers for the then ministers by midday Tuesday to determine whether similarly expensive items had been purchased as gifts by the Cheddi Jagan International Airport, Guyana Civil Aviation Authority, Maritime Administration and the Transport and Harbours Department.

Mr. Patterson has already vehemently denied receiving or authorising the purchase of a hand band and a tiepin in 2017 for GYD$504,000 for his birth anniversary. The Chairman of the Board of Directors of the Harbour Bridge , Ravi Ramcharitar said there is no proof that Mr. Patterson had received the items.

However, more official records surfaced associating Mr. Patterson’s name with yet another jewellery purchase.  On July 19, 2019, the Demerara Harbour Bridge purchased a bracelet for $370,900 from King’s Jewellery World as a “donation for  the Ministry of Public Infrastructure (Mr. D. Patterson).” In a memorandum from Trudy Fraser to the General Manager/ Finance  Manager, she asked that the procurement be made for Minister D. Patterson with the purpose being a “donation.”

It is unclear who received the donation.