High Court orders GECOM to hand over Statements of Poll, Recount for safekeeping 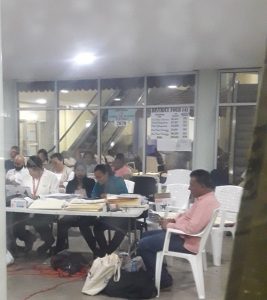 PPP representatives in the room at the Region Four Returning Office where the verification of Statements of Poll is being conducted. (file picture)

Chief Justice Roxane George-Wiltshire on Monday ordered the Guyana Elections Commission (GECOM) to hand over its Statements of Poll and Statements of Recount to the High Court for safe-keeping pending the hearing and determination of an opposition election petition about the constitutionality of the recount order.

The High Court also ordered that GECOM does not destroy any other documents connected to the March 2, 2020 general and regional elections until the petition is heard.

The orders were issued at the request of  Senior Counsel Douglas Mendes for the Representative of the People’s Progressive Party Civic’s list of candidates, Bharrat Jagdeo, and Attorney-at-Law Kashir Khan for Change Guyana. “I am asking that at this  stage an order be made that the Chief Election Officer produces all of the election documents and put them into the custody of the Registrar of the Court so that if at a later date you make an order that they be inspected that they will be there available for such inspection,” he said.

There is a time-frame for the destruction of documents, but the Chief Justice noted that the Registrar of the Court does not have the capacity to store such voluminous documents.

The High Court issued the order, even as it prepares to hear an election petition by APNU+AFC about the constitutionality of the National Vote Recount Order Number 60.

The recount figures have vindicated the PPP’s claims that there had been efforts to inflate the figures on the Statement of Poll for Region Four in favour of APNU+AFC.