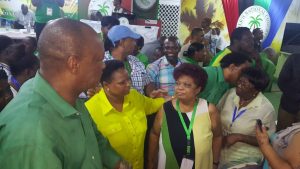 The opposition A Partnership for National Unity+Alliance For Change (APNU) on Friday signaled strongly that it would be registering its objection to the Guyana Elections Commission (GECOM) cleaning up the voters’ list by holding a claims and objections period.

“It’s only a mad person, who will done one thing twice and expect a different result; that the Claims and Objections period produced an official list of electors that had over 660,000 persons out of an estimated population of  about 785,000 persons so if you are going back again with that same list on the same process of claims and objections, you are likely to have a number that is higher than 660,000 persons,’ Mr. Harmon told a news conference.

Mr. Harmon on Friday strenuously rejected any suggestion of again using the claims and objections period methodology to clean up the voters’ list.

The coalition before and after the March, 2020 general and regional elections had feared that a bloated voters’ list had been used to facilitate voter impersonation in the names of deceased persons and migrants.

Mr. Harmon noted that election observer missions of the Organisation of American States, Commonwealth and the Caribbean Community, which had all observed that the voters’ list needed to be cleansed, have since been written to telling them that the production of a list that “will have problems again.”

The High Court has already ruled that National Database of Registrants could not be constitutionally quashed by GECOM, but the voters’ list could be refreshed or revised through, among other methodologies to be decided by the elections management agency, house-to-house registration.

The Opposition Leader said the coalition had wanted to first meet with the GECOM Chairman ahead of a meeting with the full seven-member body. “We don’t have a problem with that. We would meet with the entire Commission but, as a prelude to meeting with the commission, we wanted her to have our views on what was taking place. She doesn’t want our views, she will hear it otherwise,” said Mr. Harmon.

The governing People’s Progressive Party Civic (PPPC) has ruled out local government elections being held without concerns about alleged electoral fraud are addressed and the laws and regulations are revamped to make the process clearer and the penalties for stiffer.