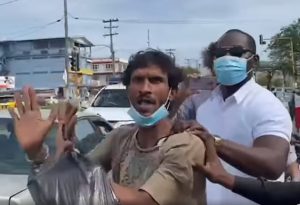 Amid concerns by sections of the public that the three men, who were Friday arraigned for the murder of the Henry cousins last September, were facing trumped up charges because the police were under increasing pressure, top police officials insisted that investigators have incontrovertible evidence.

The police sources said the Major Crimes Unit of the Criminal Investigations Department (CID) have been told that they need to do all that they could possibly do in their powers to protect a “most critical” evidence that formed the basis for the police to have been advised that they should charge specifically one of the persons.

The high-level investigators, who were directly involved in the four-month long probe into the alleged murder of Isaiah and Joel Henry between September 5 and 6, 2020, said police and the prosecution would be relying on material to convince the Magistrate and eventually the judge and jury to convict Akash “Monkey” Singh.

He was charged separately for  the offence.

Two others Vinod “Magga” Gopaul and Anil “Tampoie” Sanchara were charged jointly and were arraigned on Friday at the Georgetown Magistrates’ Court. Another of the men charged with the murder of Isaiah and Joel Henry.

They were not required to plead to the indictable offence and were remanded to prison until February 2, 2021 when they would appear at the Blairmont Magistrates Court.

Mr. Gopaul, while being escorted by police outside the courthouse, told reporters aloud as he pointed to another accused that, “this brother calling me name wrongfully.” He said, “I don’t know the Henry cousins.” Another of the accused also said he was innocent, only stating that he had been held with a small amount of marijuana.

Commenting on the arrest and charging of the trio, President Irfaan Ali praised the Head of the Criminal Investigations Department, Senior Superintendent Wendell Blanhum and his team for the breakthrough in the homicide which had triggered days of violent unrest on the West Coast Berbice Public Road. “I am very happy that we have made such great progress on this matter so this was very important for us nationally and now it’s a big step forward and I am very, very happy,” Dr. Ali said.

Police investigators had already concluded that the Henrys had not been killed where the bodies had been found on a coconut estate at Cotton Tree, West Coast Berbice. Instead, they have said that they had been killed and mutilated elsewhere and their bodies placed at the location.