US not planning military bases in the Western Hemisphere- SOUTHCOM Commander 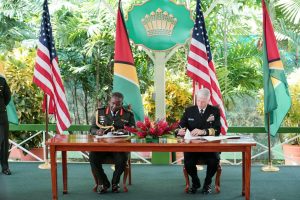 The United States Defence Department on Tuesday ruled out establishing a military base in Guyana or elsewhere in the Americas, but maintained that it would work with other nations to preserve democracy, promote human rights and fight transnational crime.

Commander of the Defence Department’s Southern Command (SOUTHCOM) Admiral Craig Faller told a joint news conference with Chief-of-Staff of the Guyana Defence Force (GDF) Brigadier Godfrey Bess that the US preferred closer military relations with its partners in the Western Hemisphere.

“The United States doesn’t seek to have bases anywhere in the hemisphere. We seek to have the right military presence as invited by our Sovereign Partners so we so we only come at the request of mutually agreed partnership for an exercise or training and so our future presence here is will be determined by our hosts are friends ,” Admiral Faller said,”  he added.

The US Coast Guard and the GDF Coast Guard last weekend conducted a joint exercise to counter illegal and unregulated fishing.

Admiral Faller and Brigadier Bess signed an acquisition and cross-servicing agreement to strengthen their security cooperation in logistics, repairs and supplies as well as trade in goods and services

Guyana participates in the annual multi-country Tradewinds Exercise that brings together military and police agencies from across the Caribbean alongside their partners from the US, Canada and other Developed Nations with far superior military assets.

The SOUTHCOM Commander repeatedly cited the mutual respect by the two nations of democracy, rule of laws and values in the news conference,”  and in contrast referred to Venezuela’s President Nicolas Maduro as a “convicted” drug trafficker whose alleged activities have adversely impacted on security of  the region.

Admiral Faller said the US military would continue to conduct exercises and training and benefitting from experiences working in Guyana’s jungles and rivers.

SOUTHCOM has also assisted the Ministry of Health in fighting the coronavirus in Guyana.

Admiral Faller is due to visit Suriname, another emerging major oil producer, where Secretary of State Mike Pompeo had also visited last year during a South American tour.