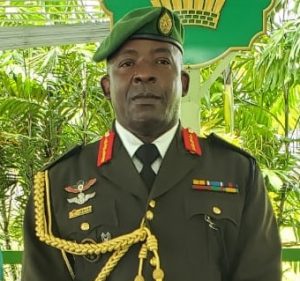 He indicated that the 15-nation Caribbean Community (CARICOM) and the 34-nation Organisation of American States (OAS) have joined the United States and Canada in condemning President Nicolas Maduro’s unilateral extension of the maritime boundary.

“Our position, the government position is that we are using the diplomatic channel. As we speak, I am aware that the Heads of CARICOM governments are meeting and the CARICOM Community has denounced the position that Venezuela has taken. The OAS Secretary General has also denounced that and lots of our bilateral partners, as you would have noticed, are in support of our position on the border issue,” he told a news conference he shared with Commander of the United States Southern Command, Admiral Craig Faller.

Venezuela has exited the OAS and its representative had been an associate of Juan Guaido who had up to recently been recognised by dozens of nations as the legitimately elected leader.

Back in 2015 after Mr. Maduro had issued a similar decree, he had withdrawn it after Guyana had mounted an intense diplomatic campaign that had even forced Venezuelan officials to meet with CARICOM representatives in Barbados.

The Guyanese army chief said since the decree was issued by President Nicolas Maduro earlier this month, the GDF has heightened its alert. “We  have changed our postures on the border and we are there more alert and, like I said, are ready to constitutionally preserve Guyana’s patrimony,” he said.

Following a special meeting of CARICOM leaders earlier Tuesday, the organisation expressed its deep disappointment and concern at the decree and subsequent statements by Venezuela with respect to that country’s border controversy with Guyana. Of particular concern to CARICOM are  “intimations of the creation of a strategic area of national development called “Territory for the Development of the Atlantic Façade”.”

The decree provides for the creation of a strategic development zone for the country, called “territory for the development of the Atlantic Façade” to provide “adequate protection and safeguard the jurisdiction of Venezuela in continental spaces, marine areas, bordering areas, submarines, island, lake, rivers and the territorial sea ”. Also covered are soil, subsoil, continental insular and maritime airspace, including “the resources and elements of interest that are found or discovered”.

The Stabroek Block offshore concession in which more more than 8 billion barrels of oil equivalent have been discovered by ExxonMobil extends to offshore the Essequibo Region as well. Venezuela’s Navy has twice in recent years intercepted seismic research vessels that had been working there for US oil companies, Anadarko Petroleum and ExxonMobil.

The Caribbean Community, like the US and Canada, said it is in full support of the judicial process underway at the International Court of Justice (ICJ) which is intended to bring a peaceful and definitive end to the long-standing controversy between the two countries.

“CARICOM reiterates in the strongest possible terms its firm and unswerving support for the maintenance and preservation of the sovereignty and territorial integrity of Guyana. CARICOM firmly repudiates any acts of aggression by Venezuela against Guyana,” CARICOM said.

Meanwhile, the GDF Chief-of-Staff said the Sindicato gangs still pose a security threat to Guyanese because Venezuela was being badly governed. “Yes, the Sindicato threat: it’s still there because we all are aware of the situation in Venezuela where the country, it’s poorly led, and their economic and social issues that force non-State actors to survive. Because of our border with Venezuela, we definitely are affected by that but I mist say that the Guyana Defence Forcer are ever vigilant and we continue to work to ensure that the citizens of Guyana are safe,” Brigadier Bess said.

Hours later, the Guyana Police Force said Venezuelan bandits opened fire on civilian lawmen as they were Monday night pursuing them after robbing a Guyanese couple of GYD$10 million, guns, ammunition and jewellery.

2021-01-12
Denis Chabrol
Previous: US not planning military bases in the Western Hemisphere- SOUTHCOM Commander
Next: Fuel tanker trucks destroyed by fire at Parika