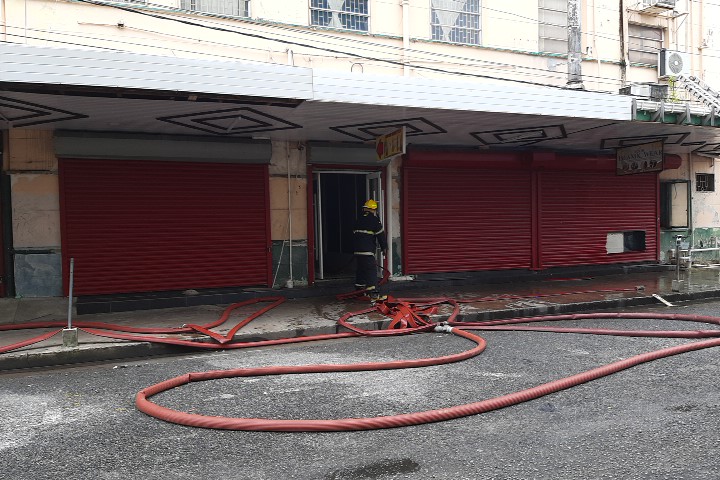 The kitchen area at the eastern end of Fogarty’s Building.

Fire on Friday morning in the kitchen area of Fogarty’s building damaged a section of  the building and caused the suspension of business by several stores in the huge concrete building located on Water Street, Georgetown.

Fire Chief Marlon Gentle told reporters at the scene that the blaze is believed to have been caused by a malfunctioned extractor fan.

Mr. Gentle said the fire boat was deployed in the Demerara River for the first time to support the several fire tenders that obtained water from nearby canals and trenches.

Fogarty’s department store no longer exists as an entity because the new owners of the colonial-era concrete building have sub-divided the building and rented them to smaller enterprises. The Guyana Telephone and Telegraph (GTT) is believed to be the single largest tenant on the ground floor.

The Fire Chief said the Guyana Fire Service began receiving several calls that smoke was seen emanating from the eastern end of the building and tenders from several fire stations were deployed the scene. “When they got here, they encountered heavy smoke conditions on the lower floor with smoke creeping to then upper floor. They were able to go into a quick-attack mode and located the fire somewhere in a kitchen. The fire was already spreading through the ceiling and going to the business area of the store,” Mr. Gentle said.

He said the fire was eventually isolated and extinguished.  The Fore Chief said the building was due to be fully ventilated to remove heavy pockets of smoke from the building and confirm that there are  no other pockets of building.

Mr. Gentle said preliminary information suggested that the fire started at an extractor fan in the kitchen rather than a kitchen appliance. “I was briefed by the crews that went into (the building) and there seemed to have been something went wrong in the kitchen but I don’t think it was an appliance. We believe it’s an electrical fan; one of these extractor fans,” he said.

The Fogarty’s building was bought from La Parkan several years ago by Akbar Auto Sales for GYD$1.4 billion in 2014.

A major fire in December of 2003 had gutted Muneshwers Limited’s building across from the Fogarty’s complex, the last known major fire around that commercial ward of Stabroek in recent years.