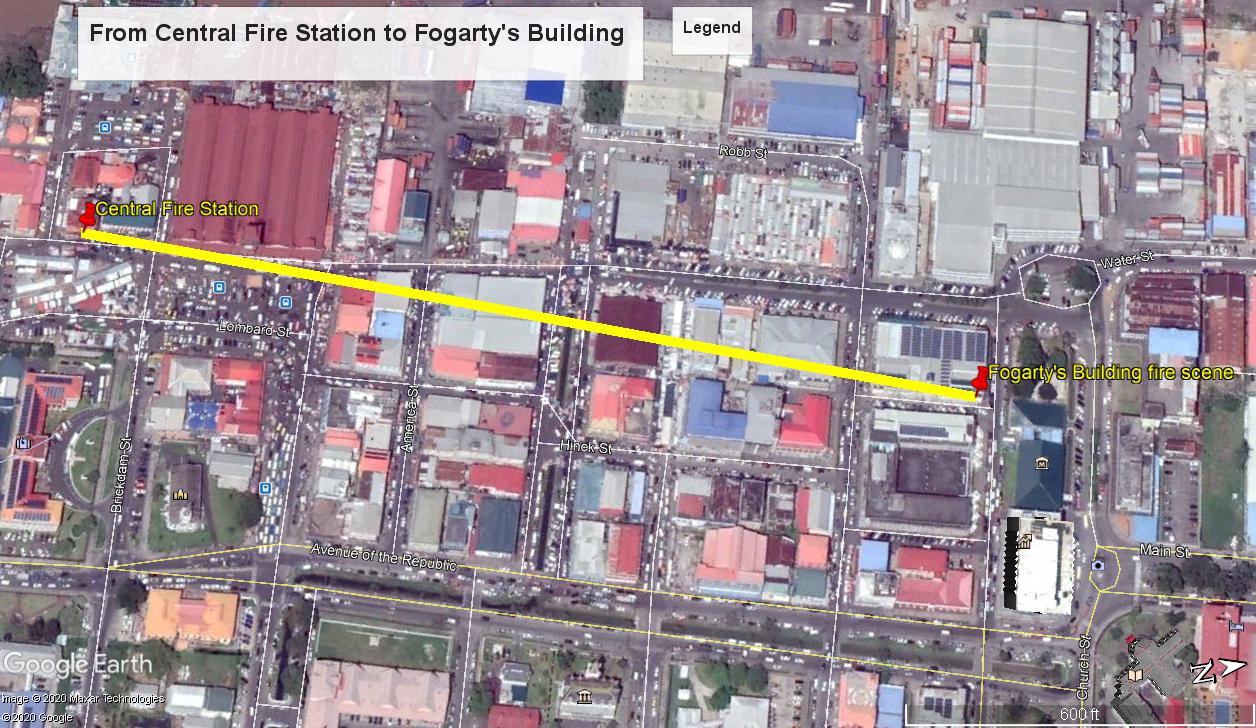 Central Fire Station to the scene of the fire at Fogarty’s Building.

The Guyana Fire Service’s  headquarters operation will  be decentralised due to  heavy traffic congestion in the Stabroek Market area which delays emergency response, the latest being on Friday when fire tenders took eight minutes from the Central Fire Station to Fogarty’s building.

“That is also under active consideration- either to remove or, as we say, declutter our area around the fire service,” Fire Chief Marlon Gentle  told News-Talk Radio Guyana/ Demerara Waves Online News. when asked whether one of the plans was to  relocate the Central Fire Station.

Sources said the plan would have to include retaining that fire station to respond to calls in the central business district.

The area is congested almost all day by parked minibus, taxis,  street vendors outside Stabroek Market and other areas of Water Street. Successive governments have over the decades talked about either removing the vendors permanently or relocating the headquarters of the Guyana Fire Service from the Stabroek Market area.

The distance between the Central Fire Station and Fogarty’s is less than one mile, but Fire Chief Marlon Gentle said fire tenders took eight minutes to get to the scene. “We had some setbacks, especially our movement of our equipment from the Central Fire Station area. We took approximately eight minutes just to clear that area just because of congestion, traffic and everything else,” he told reporters at the scene.

The fireboat, which was acquired in 2019, and tenders from other fire stations also responded to the fire call.

As part of efforts to increase its response time from the Central Fire Service, he said discussions were up to Thursday held with the Minister of Home Affairs Robeson Benn and other representatives to ‘decongest the area.” “I know it’s not going to be a one-shot or it’s not going to be an overnight thing but we still have to work because we realise it’s an impedance to emergency movement, not only fire (tenders) but ambulances and everything else

“This area is one of the high-risk areas in the city of Georgetown that we know that we have to have a very robust fire response whenever a call is made regardless of what the situation is,” said Mr. Gentle, adding that was the case on Friday in responding to the call at Fogarty’s.