US Ambassador Lynch: “Lawlessness and rioting are always unacceptable”; those responsible for Capitol riot will be “held accountable” 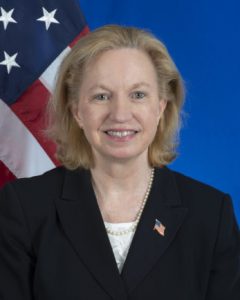 United States (US) Ambassador to Guyana , Sarah-Ann Lynch Thursday afternoon decried the invasion of the Capitol building in Washington DC by hundreds of President Donald Trump’s supporters as the Senate was certifying election results that confirmed that he lost  to President-elect Joe Biden.

“I am deeply shocked and saddened by the events which took place at the U.S. Capitol yesterday. Lawlessness and rioting are always unacceptable, and do not represent the values of the United States as enshrined in the U.S. Constitution,” she said in a brief statement on Facebook.

Ms. Lynch overnight has come in for criticism in some quarters for being silent about the incidents on Wednesday that saw offices being ransacked, furniture and other items being broken and four persons being killed. The American envoy has also been cited for being virtually silent by the ruckus by then opposition People’s Progressive Party (PPP) supporters at the Region Four Returning Office as Returning Officer Clairmont Mingo had been declaring controversial results that would have handed a victory to A Partnership for National Unity+Alliance For Change (APNU+AFC). The US has been among major Western Nations and organisations that had called for APNU+AFC to accept the results of the national vote recount and facilitate a peaceful transition of power to the People’s Progressive Party (PPP).

In her reaction to the events at Capitol Building, the US Ambassador said nothing was wrong with peaceful protests and suggested that it was violent. “There is a role for peaceful protests to hold leaders to account, but that is not what we saw yesterday,” she said.

Ms. Lynch was confident that the US would emerge out of this difficult period as “our democratic institutions remain robust.” She suggested that those responsible for Wednesday’s unrest would be punished, even as her country was now on the road for the handover of power from the Trump to Biden administration. “Those responsible will be held accountable and the democratic process will continue. Our nation will have an orderly transition to a new administration on January 20th,” she said.

Like the US Ambassador to Trinidad and Tobago, Joseph Mondello, she said her country would emerge intact.  “he United States has been tested before and will be tested again, but our strong institutions will always prevail,” she said. Ambassador Lynch applauded the US lawmakers who admirably performed their duties to protect and defend American democracy.

Similar to sentiments by Mr. Mondello, she said she was truly heartened by notes from allies and partners around the world about their faith in the strength of US democracy.

Ever since President Trump had started lashing out at American media houses and journalists for asking tough questions, the American Embassy had for several years now played down World Press Freedom Day observances.

US Ambassador to Guyana Statement by Ambassador Karen Lynn Williams earlier Thursday  heaped condemnation on the Trump supporters, saying that the Capitol Chambers “had been violently trespassed by an unlawful mob.”

She welcomed the eventual eviction of the trespassers by members of the National Guard and the eventual return Wednesday night of members of the US Congress and Vice President Mike Pence, saying that was a “testament to the strength of our democracy and the courage of our elected representatives.”

Ambassador Williams said Thursday’s occurrence was a sharp reminder that democracy is not static — it requires vigilance and commitment.” Like her counterpart to Guyana, the US Ambassador to Suriname said the perpetrators would be sanctioned. “Those perpetrating the attack will be held accountable and the rule of law, not the mob, will prevail.”

She thanked those who offered messages of support, saying that the US and Suriname and the US shared common values  they share and their  joint commitments to democracy and the rule of law. “The democratic process in both of our nations has been tested in the past, and surely will be tested in the future, but we know these experiences and our reactions to them make us stronger,” she said.

2021-01-07
Denis Chabrol
Previous: Anil Nandlall, Britain, Canada, OAS called for democracy to prevail in the US
Next: Fire at Fogarty’s building extinguished