Guyana-born nurse, who vaccinated US VP-elect, denies jab was fake, assures “it is safe” 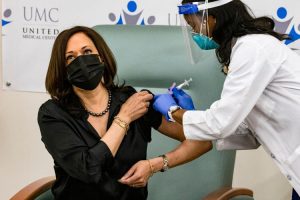 The Guyana-born United States-registered nurse who administered the COVID-19 vaccine to United States (US) Vice President-elect Kamala Harris on Tuesday debunked claims that the vaccine was a farce, even as she said there has been a spike in inquiries since the jab was administered late last month.

Nurse Cummings says she personally conducted research about the vaccine before taking the Pfizer-BioNtech version herself and administering the Moderna brand to VP-elect Harris, and so she is well-placed to rubbish claims that the vaccine is fake. “As the person who actually received the vaccine and administered it to the Vice President, I have seen comments that there was water in the syringe, there was saline in the syringe, the plunger didn’t move. All of those accusations and speculations are untrue.

“And, I can say as the person who actually did vaccinate the VP-elect, it was the actual vaccine and the research has shown that it is safe, both the Moderna and the Pfizer vaccines. The research has shown that it is safe and I think we need to stop the speculation and really get involved in this opportunity that has the potential to save as group,” said Ms. Cummings who is now a Clinical Nurse Manager at the United Medical Center in southeast Washington, DC.

Nurse Cummings advised persons, who have concerns, to research the vaccines themselves “and not just base your decision on futile, frivolous talk and I would advise anyone who has the opportunity to have access to the vaccine to take it; it is one step closer to us ending the pandemic.”

Born in Bartica, Ms. Cummings grew up on the Corentyne and remembered vividly her childhood games and other activities. She eventually moved to Georgetown where she attended West Ruimveldt Primary School during the tenure of well-known Guyanese ‘Common Entrance’ teacher, Wilfred Success.

She plans to visit Guyana this year as her grandmother would be 100 years. She also plans to contribute to the development of Guyanese youths about health, wellness and living a “holistic” life and eventually work along with the Ministry of Health and the nursing fraternity.

Admittedly, she was nervous when she was informed that she would have been administering the jab to the Vice President-elect. “I was so nervous and ‘yes’ I couldn’t sleep for about two nights prior to administering the vaccine and I would say about a day after I was still very hyped. That excitement was bubbling and I was overcome with just anticipation but I can say that I am more settled now and I just feel honoured again, blessed, grateful that the opportunity presented itself and that I complete it successfully,” she said.

The nurse said that Ms. Harris’ decision to openly take the vaccine sent a message to people of colour in the US and worldwide. “I think it was a great act of heroism and leadership on her part and I hope and I believe that it has convinced and persuaded others to follow suit,” she said. The nurse said since then, several health care workers and other members of the public have been inquiring about how they can be vaccinated just because of her,” she said.