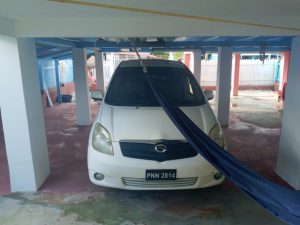 The driver, 39-year old Bhagwandin  Narine of  Anna Cathrina, West Coast Demerara, told police that the gunmen pretended to be passengees and asked to be transported from opposite the West Demerara Regional Hospital, Best Village to Policeman Corner, Parfaite Harmomie, West Bank Drmerara.

However, Mr. Narine told police that when he picked up the men,  they were masked.  “On arrival he picked up two unidentifiable male, both of whom had their faces covered with black mask from their noses downwards,” the Guyana Police Force said in a statement.

He told police that he operates from New Road Vreed-en-Hoop West Coast Demerara. He saud at about 8:30 Tuesday night he was sent to make a pickup  opposite the West Demerara Regional Hospital.

“As the victim reached the Policeman corner one of the Suspect then told the Victim to stop at a heap of white sand and he complied. The suspect behind the victim then placed the victim in a vice around his neck and pointed a black handgun to his head and told him to stay quiet and he complied.

The suspect in the front passenger seat then exited the car and pointed a black handgun at his abdomen and told him if he made noise he would die,” police said.